Lawyers for the 31 suspected Western Togoland secessionists have asked for bail for their clients, slamming the state for its inhumane treatment of the suspects.

According to the lawyers for the group, which included Theophilus Donkor and Benedict Kofi Kyei, their clients have been denied a bath for several days.

“You have uprooted them from their region, you keep them here and say you need more time, more time to do what. The fact that this has become a national issue does not mean the right of these people can be trampled upon.

The prosecution, led by ASP Slyvester Asare, had asked for more time to complete its investigations the accused persons.

“My client is the only lady among them and as we have seen these people have not bathed for several days and these are people who are in a discriminatory position,” they held.

They further argued that “the real culprits are hiding somewhere and not these innocent people”.

The Accra Circuit court judge, Rosemary Baah, then asked the only lady among the group called Rejoice, if the arguments raised by the lawyers are true.

“Have you had your bath since you were arrested?” the judge quizzed.

“I didn’t bath for the first three days. They refused to give me water to bath,” Rejoice replied almost in tears.

The court will rule on the bail application on the next adjourned date. The case continues on October 21, 2020. 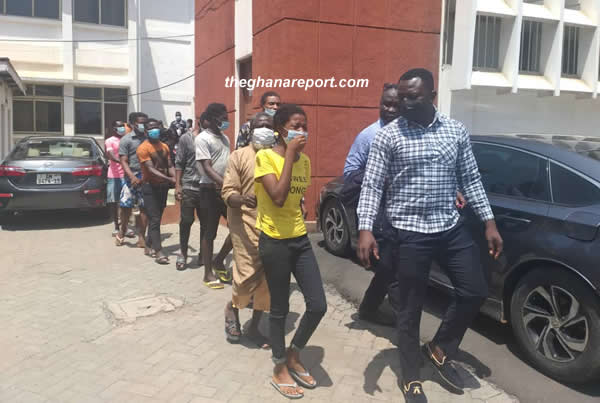 Led by the Chairman of the Homeland Study Group Foundation,  Charles Kormi Kudzodzi, alias Papavi Hogbedetor, the group embarked on a series of activities to have the Volta Region, parts of the North East and Upper East regions declared as an independent state called Western Togoland.

On May 9, 2017, the group unsuccessfully tried to declare the independence of Western Togoland.

On Thursday, May 9, 2019, the Ghana Police Service arrested eight leaders for embarking on activities deemed unlawful.

Papavi Hogbedetor, however, announced the separation of the Western Togoland on social media on Saturday, November 16, 2019, after a group meeting in Ho.

The police declared the 85-year-old leader of the group wanted in December 2019 over the declaration.

In February 2020, the 66 Artillery Regiment arrested 21 suspects from a secret training camp at Kpevedui, near Dzodze in the Ketu North Municipality in the Volta Region.

The group also managed to hoist a flag of Western Togoland in front of the Volta Regional Coordinating Council on the eve of Ghana’s independence day celebration this year.

The 31 persons were arrested over Friday dawn’s revolt in the Volta Region have since been slapped with five charges.

Their pleas were not taken as the state prosecutor ASP Sylvester Asare informed the court the state wants them remanded into custody to aid investigations.

He also informed the court the Bureau of National Investigations and other security agencies have left Accra to the Volta Region to conduct further investigations.