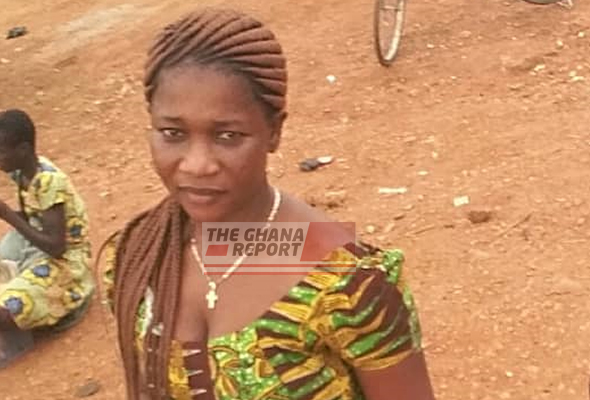 It was the couple’s first pregnancy. The euphoria was high, mixed emotions of anxiety, nervousness and joy took over, as an expectant father awaited his first child.

But inside the labour ward at the Ga West Municipal Hospital, Amasaman, in the Greater Accra region, a fatal struggle ended those expectations.

“My wife’s last words to me were ‘I’m dying. Why can’t they just operate on me?’” Collins Tekolibe, an Insurance Broker recalled that day on May 2, 2019.

His wife was 34-years old, and the marriage was less than a year old.

Collins Tekolibe sat down with theghanareport.com reporter, Aba Asamoah, and revealed his listless attitude towards life since that day.

“I don’t see the essence of living. My baby is the only reason for keeping me alive.”

He believes his wife’s death was avoidable. She died because of medical negligence, he alleged.

“We got to the hospital at about 2 pm on Thursday, May 2, 2019, and the nurses directed us to the waiting room because, according to them, my wife’s cervix had opened to only two centimetres. It needed to open to 10 for her to deliver.

“We waited until 9 pm. It opened by one centimetre. So, I was with her till the following day, Friday and the pain had increased. It was as if I had just brought in an emergency.

He accused the nurses in the maternity ward on that day of being indifferent to the plight of his wife.

“…They gave me prescription upon prescription to buy and I was running helter-skelter all over the hospital in search of the drugs. On one of my trips to the pharmacy, the new pharmacist who replaced the old one [on the shift] demanded a folder and it confused me.

“He later explained to me that the drug I was about paying for is covered by the National Health Insurance Scheme.  So I went back to the nurses for the folder and they had affixed it to other folders while they sat and played on their phones.The pharmacist insisted they sign my folder for me before they did,” he recalled.

Collins’ reason for going to the hospital was to offer soothing words to his wife as she battles the pains of labour.

But public hospitals in Ghana bar husbands from the labour wards and theatres. So, he waited. He counted minutes into hours. He counted the number of windows in the hospital. He could have counted trees and their branches and chairs until 12.30 pm.

“I was standing, I didn’t know what was happening, so at about 12:30 a nurse came to me and whispered to me that my wife had delivered. I heaved a sigh of relief, but apparently, it was the beginning of my problems,” he said wiping tears.

After they delivered the news, Collins didn’t see the baby and mother until about an hour later. Out of curiosity, he said, he peeped through the window of the labour ward to have a glance at his new family.

“I wasn’t seeing the baby or my wife so I got nervous and went close to the transparent window and I saw my wife sitting on the bed. The next thing I saw was the nurse standing by her pushed her violently and I use violently instructively and she fell on the bed breathless….”

” I suspected my wife had died, so I panicked and went to the stationed nurses to question them why they were maltreating my wife ?”

The question tickled nerves. The nurse who allegedly pushed Mrs Tekolibe hurriedly came out of the ward to confront Collins.

“These were her words, ‘you sef you have been cooperating with us all this while, why are you now saying we are maltreating your wife? Come and see, your wife is even bleeding, and your baby is not even feeling fine…see because of what you have done we are going to refer you to Nsawam [Government Hospital]. We don’t want you to give us any trouble”‘ he recalled.

He would learn later that the prolonged labour had affected the brain of his son.

In a state of ambivalence, Collins was asked to send his son to the Nsawam Government Hospital. There was no ambulance—It was just him and less-than- a-day-old child. 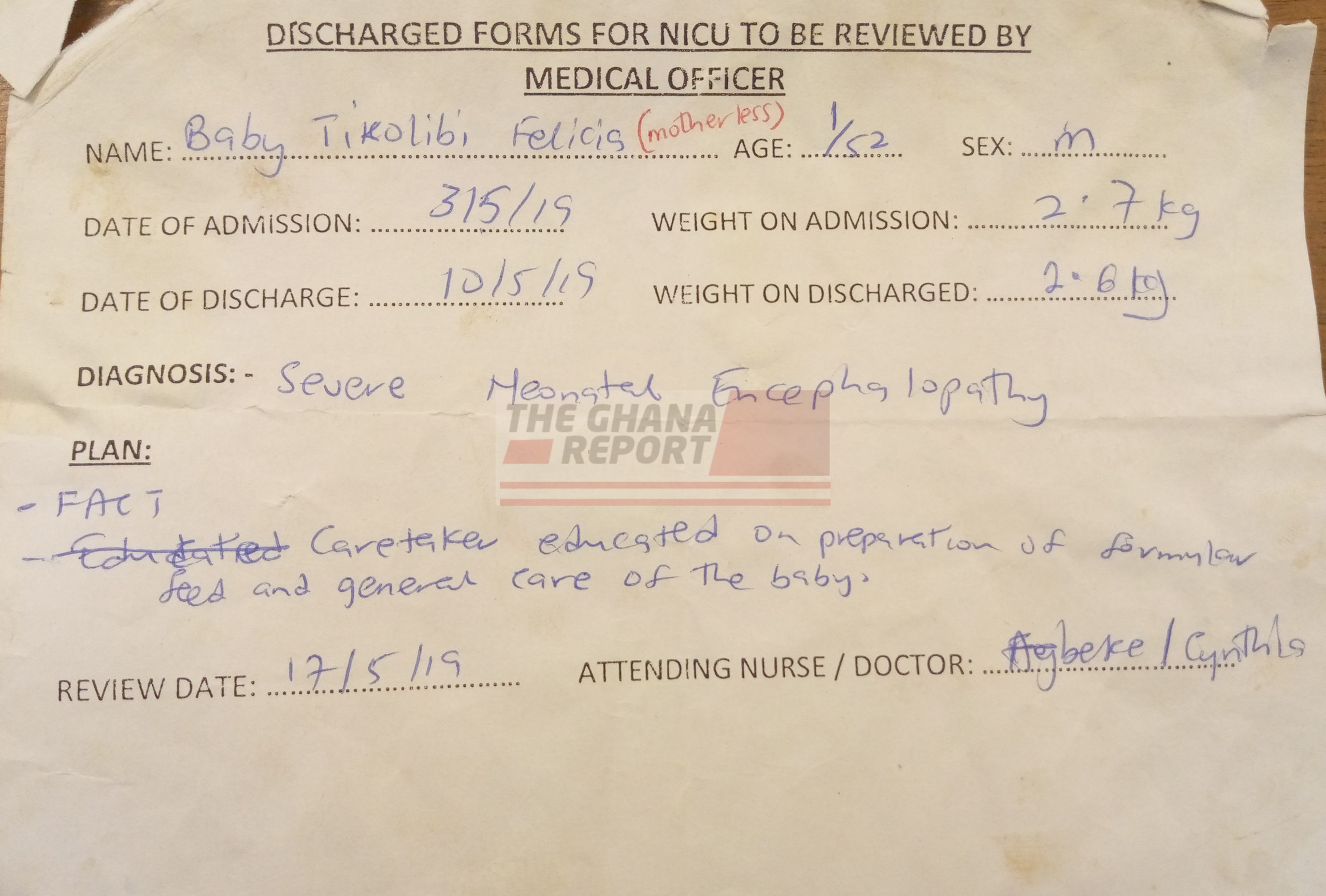 His world came crashing, he said, as he was torn between sending his child to the referral hospital or being with his beloved wife.

He chose the baby over his wife since, according to him, she was already with professionals.

But before he could pick up his baby and head to Nsawam,  the hospital asked him to donate blood for his ‘dying’ wife.

” I bought the blood and sped off to the Nsawam [Government] Hospital with a friend, with no escort from the hospital. I left my wife in the hands of a lady who was also there to see a relative.

“A few minutes into the journey, the lady called to say they had rushed my wife to the theatre, and that heightened my nervousness, I was totally confused, but the hospital didn’t call me” 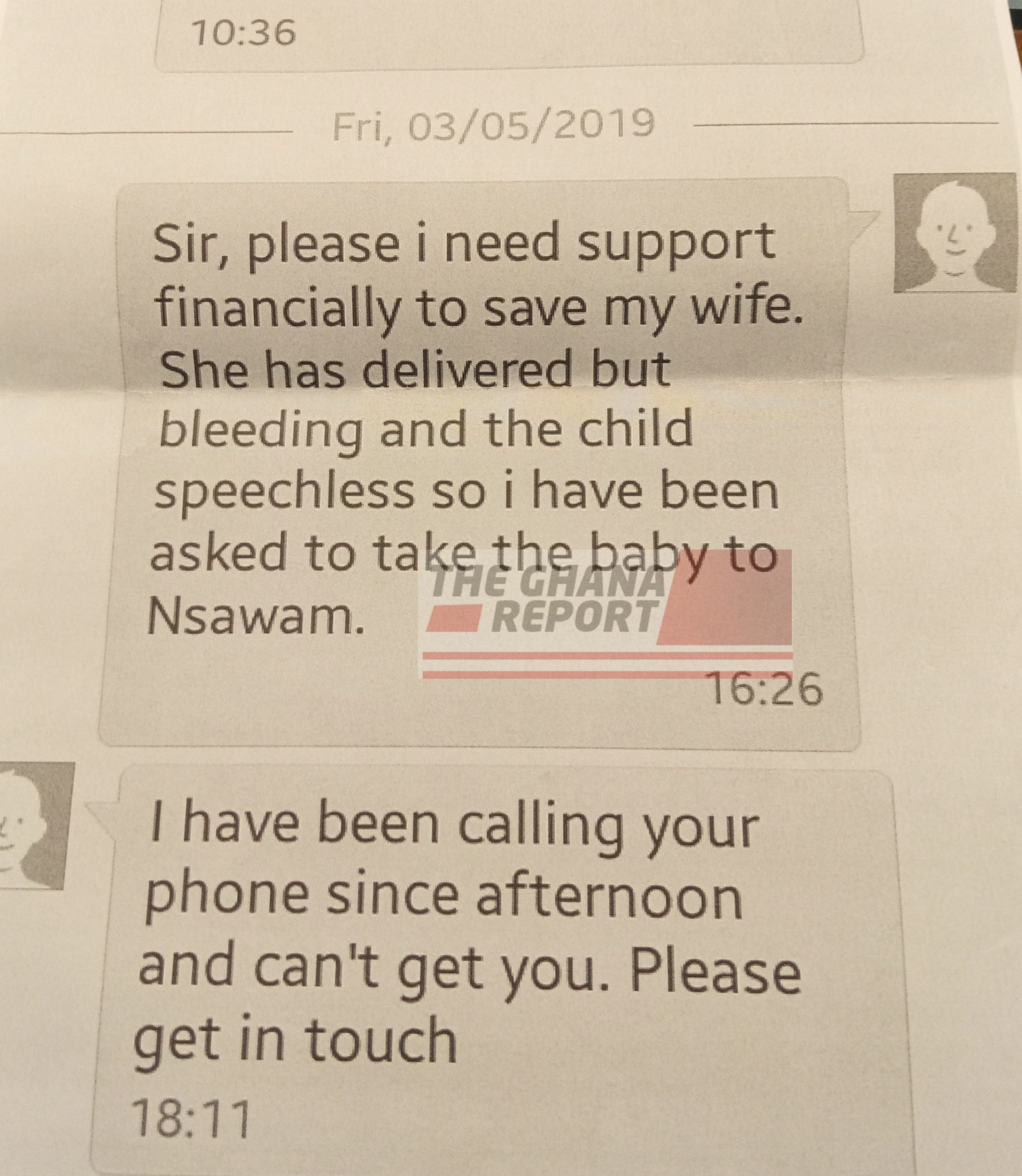 “Around 8:30 pm, we returned from Nsawam to Amasaman and I went straight to the nurses to enquire about of my wife, only to be told that my wife had died,” he said with clenched fists. 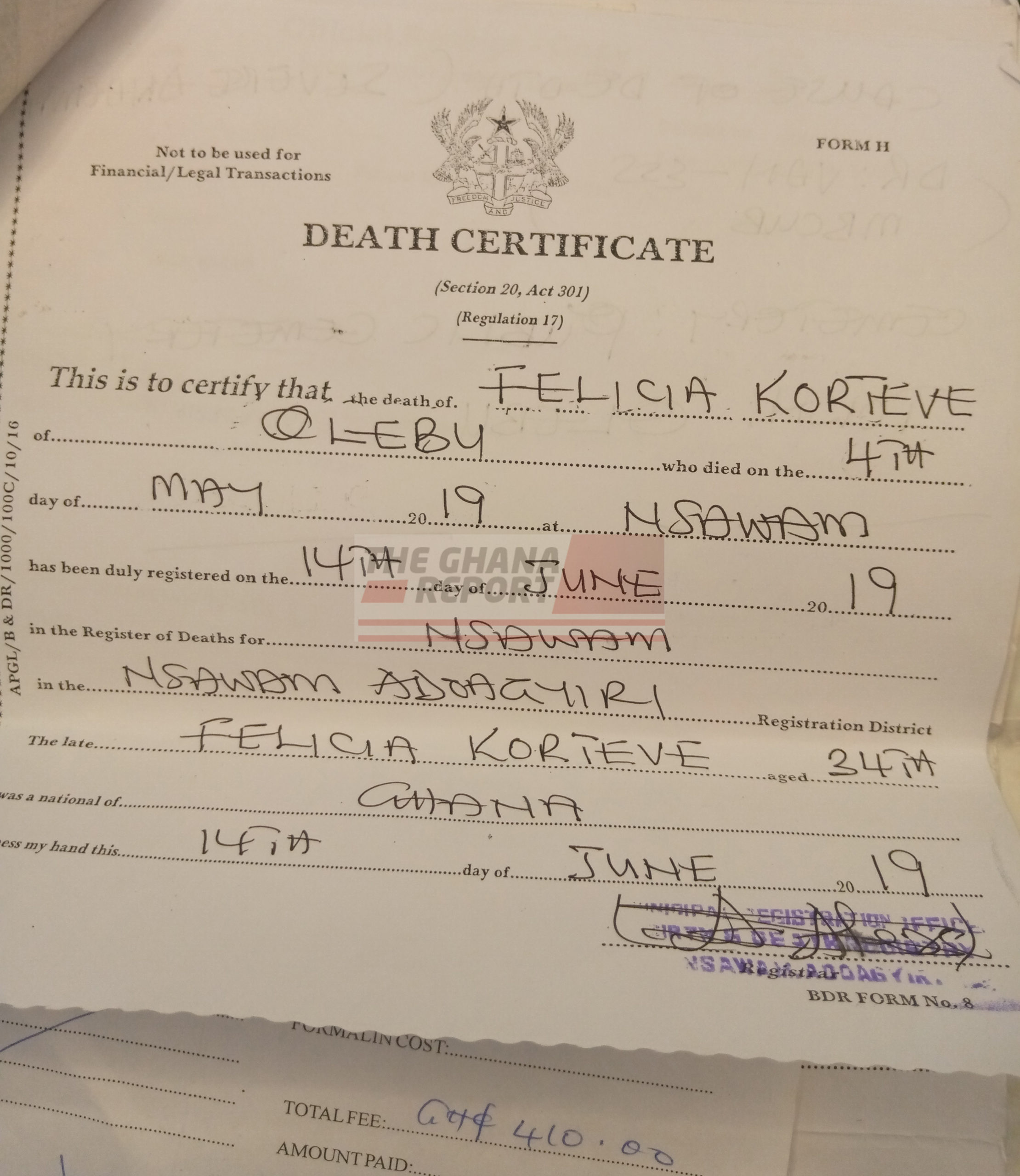 The widower, who is bent on getting justice for his late wife, said the hospital conducted no autopsy on his wife, rather the hospital (Ga West) gave him a coroner’s inquest to be delivered to the police.

But the police after asking of his mission told him that the hospital should be able to tell the cause of death, given the number of hours his wife spent at the facility.

Since then, the soft-spoken man has been on a mission to draw public attention to the issue and “ensure that my wife doesn’t die for nothing, and no woman dies in that hospital like that again.”

” After a week of my wife’s death, I went to the hospital to see the superintendent, Dr Ntiamoah Sarpong, but it appears he was the last person to have seen my wife at the theatre. That meeting did not yield any result. From his demeanor, I noticed he wasn’t ready to cooperate with me, I sensed a conflict of interest.

” I further petitioned the Regional Health Directorate, but that did not also yield any result. The directorate instituted a committee to look into the matter they came up with a report justifying my wife’s death. They did not give me the findings of the committee, they just read it to me in a meeting” he said. 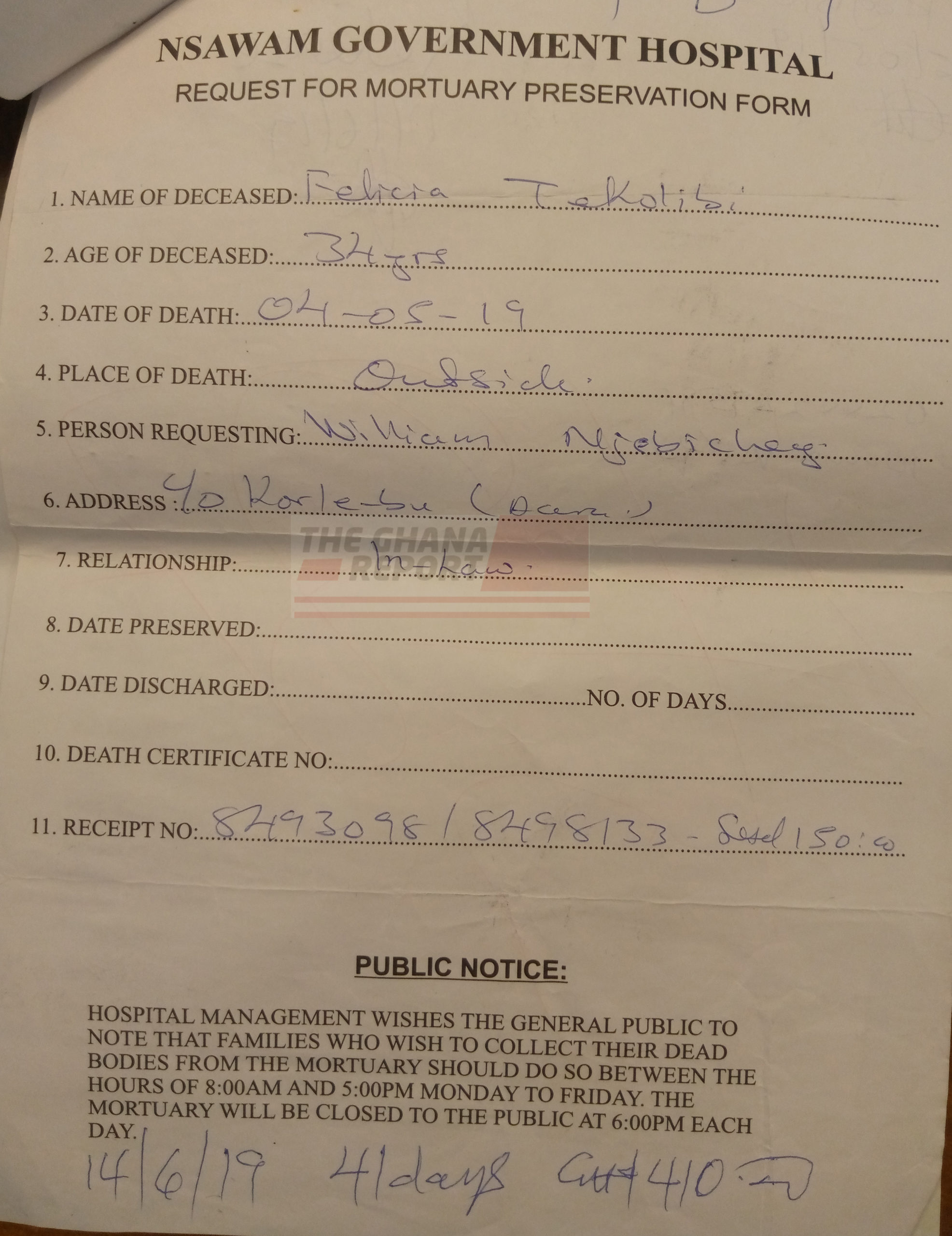 Having lost hope in the health system, Collins said, “I am saddened by the country we are living in. My wife deserves justice. She paid taxes that were used to pay her ‘murderers’.

When contacted, the Medical Superintendent at the Ga West Municipal Hospital, Dr Eric Sarpong-Ntiamoah, declined to comment on the issue but referred theghanareport.com to the Regional Health Directorate.

According to him, it was beyond him.

“The unfortunate thing is that this case has gone beyond me. He complained to me and he felt dissatisfied. So he petitioned the Regional Director of Health, who duly set up an investigative team so the team came here, listened to us and listened to him,” he said.

“It is the Regional Director who can give any details of whatever was found or whatever the outcome was, it is beyond me,” he said.

When theghanareport.com contacted the Regional Health Director, Dr Charity Sarpong, she also declined to speak with the same explanation that the matter was beyond her.

She referred theghanareport.com to the Head of Legal Affairs, Dr Emmanuel Ankrah.

” This matter is beyond me because when Collins petitioned my office, we constituted a team, the committee’s findings were explained to him in the presence of his lawyer, So, I don’t know what else he is after….so you speak to the Head of Legal [Ghana Health Service], he can best speak to the matter,” she said.

An email sent to Dr Ankrah on Wednesday is yet to be responded to,  although he promised to do so in a phone call. 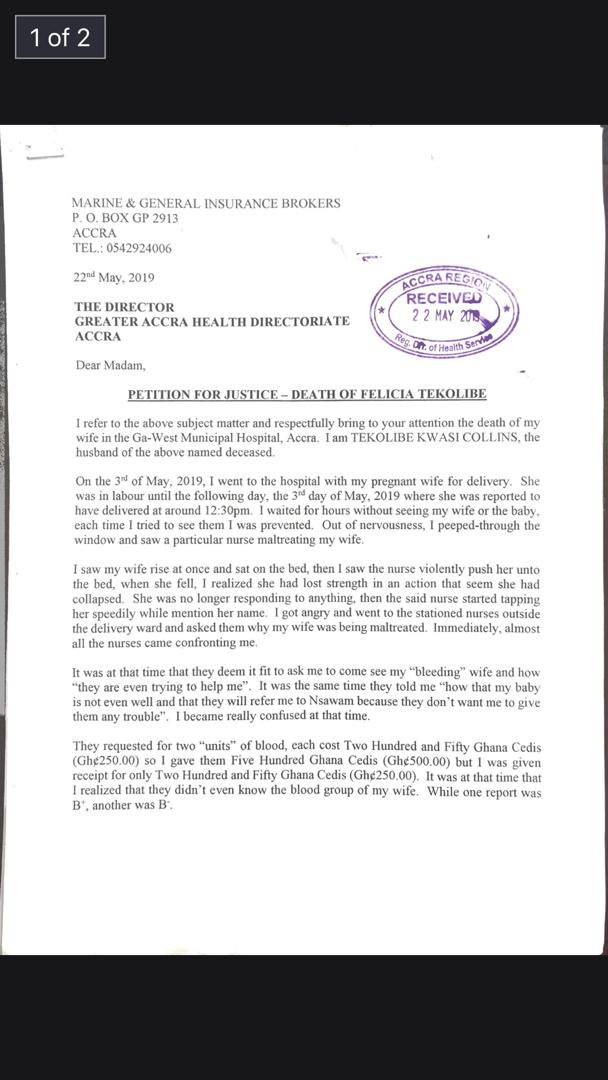 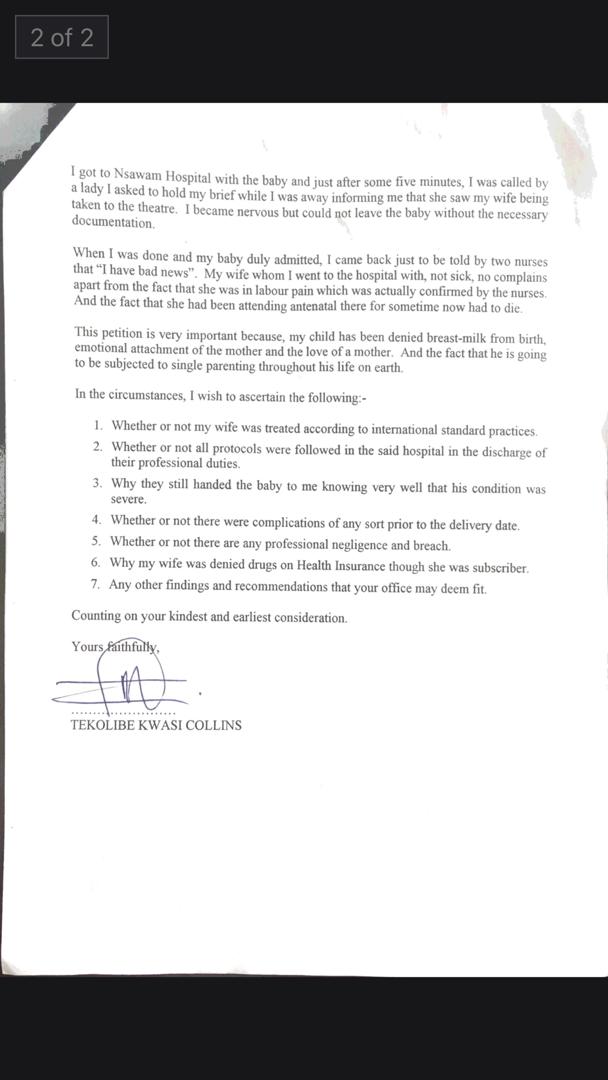