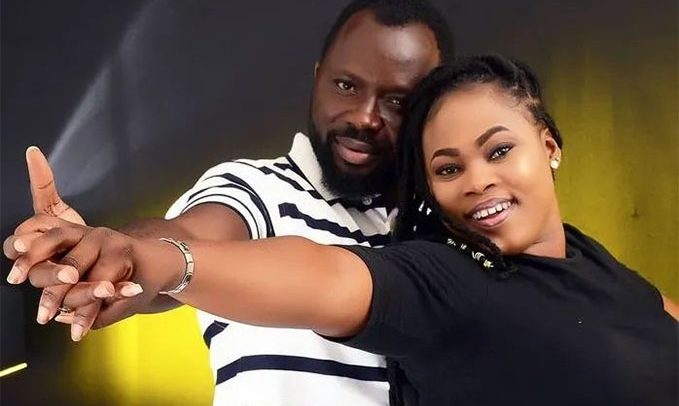 My Wife’s Video Not For Me – Joyce Blessing’s Husband

Dave Joy, the estranged husband of gospel musician Joyce Blessing says he is not the man mentioned in his wife’s leaked video.

“Joyce never sent that video to me,” he disclosed on Thursday.

In a video that has since gone viral on social media, Joyce was captured looking drunk while she gulped down a bottle of red wine.

She also expressed her love for a certain man in the video, which according to her management in a press statement was meant for her husband.

“Joyce Blessing wishes the general public to disregard the spin being placed on a viral video currently circulating on social media to place Joyce Blessing in a bad light. This video is, first of all, an old video of a loving wife expressing private feelings to her husband and the contents were not meant to be circulated publicly,” the statement indicated.

However, Joyce’s husband who identifies himself as Kwabena Adu Gyamfi aka Dave Joy said the video was not meant for him.

According to him, he is not the certain Kwame allegedly mentioned in his wife’s video, explaining he is not called Kwame.

In his reaction to the video making the rounds, Dave Joy said he is still in court with Joyce over their marriage. They haven’t officially divorced yet. Joyce, therefore, remains his wife but he was not the one she made the video for.

He added that she was wearing the wedding ring he bought for her but the alleged Kwame name she mentioned is not him.

He expected that her management would have reached out to him before their claims that she made the video for her husband.

“Ghanaians, I am called Kwabena Adu Gyamfi. I am not called by the name Kwame. Joyce never sent that video to me but that Kwame she made mention of. I didn’t want to comment but I am only clearing my name due to a lie. Indeed she was wearing my ring in the leaked video.”

“Joyce’s management claims that the video was recorded and sent to me. I want to state that Joyce is still my wife because we haven’t traditional dissolved our marriage,” he added