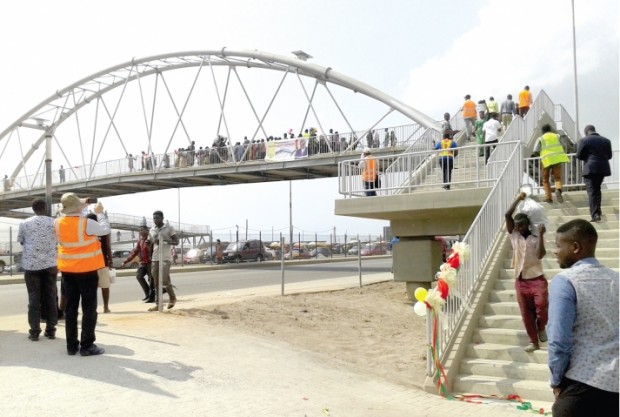 N1 highway to get 3 new footbridges

Government plans to construct three footbridges on the George Walker Bush Highway in a bid to curb the increasing number of pedestrian deaths on the road.

Over 60% of highway crashes recorded on N1-Report

About 60% of road crashes on major national highways in Accra, were recorded on the N1 highway. This is according to the first AMA Road Safety Report, analyzing data from 2011 to 2015.

They footbridges will be located at Lapaz Junction, Akweteyman Junction and Awoshie.

Answering questions on the floor of parliament, Roads and Highways Minister, Kwesi Amoako Atta, indicated that the construction adds up to already existing interventions to deal with road accidents on the N1.

“In 2019, next year, three footbridges will be constructed each at Lapaz junction, Akweteyman Junction and Awoshie,” the Minister said.

These footbridges will be part of the Accra Metropolitan Assembly (AMA) – Bloomberg initiative for junction improvement to enhance pedestrian safety and avert accidents.

Meanwhile, MP for Okaikwei Central constituency, Patrick Boamah, says he will hold the minister to his word to deliver the project for his constituents.

He said this intervention was “very critical.”

“We have to commend the government and also ensure that the minister’s promise is kept,” Mr. Boamah said.

The AMA, in partnership with the Bloomberg Initiative for Global Road Safety (AMA-BIGRS), launched a Road Safety Strategy 2018-2030 in Accra last Tuesday to enhance the safety of pedestrians and motorists in the metropolis.

Supported by SSATP-Africa the strategy focuses on redesigning of some roads with a high record of car crashes and fatalities to create safe mobility on the roads.