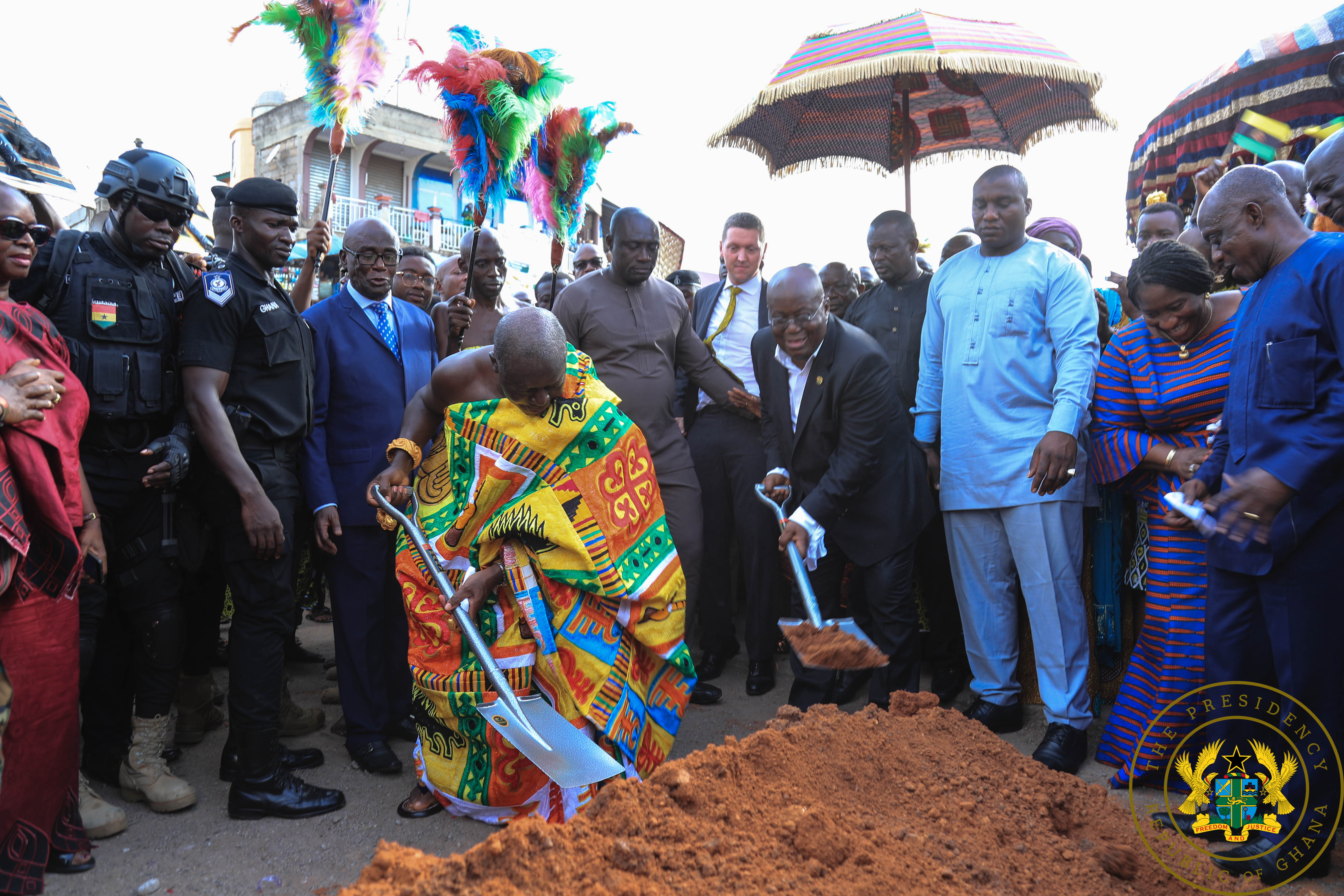 President Nana Addo Dankwa Akufo-Addo, has cut the sod for the commencement of phase two of the redevelopment project of the Kumasi Central Market and the provision of associated infrastructure.

Speaking at the groundbreaking ceremony on Thursday, 2nd May, 2019, at Kejetia, President Akufo-Addo indicated that the start of the 2nd phase of the project, in addition to numerous projects ongoing in the Ashanti Region, and, across the country demonstrates government’s unwavering commitment to deliver significant infrastructure projects that will create jobs and enhance economic development.

“The redevelopment of the Kumasi Central Market is a two hundred and forty-eight-million-euro (€248 million) project, and it is being financed by Deutsche Bank of Germany, with export credit guarantee from the United Kingdom Export Finance (UKEF). The construction will be undertaken by Messrs Contracta Construction Ltd, UK, and will be finished within 48 months,” the President said.

Additionally, the project will also provide other essential facilities such as a waste treatment plant, a police station, a fire station, post offices, and an amphi-theatre.

President Akufo-Addo was confident that the redevelopment of the Kumasi Central Market, and the delivery of associated infrastructure, will help address and mitigate the underlying causes of fire outbreaks in this market; create some 900 direct jobs and 2,500 indirect jobs.

He said it will also improve the safety and security of traders and consumers; and provide better conditions for mobility in the area, allowing traders to receive their merchandise, and customers to access the market, in a safer and more organized manner.

“I appeal to all of you, city authorities, traders, customers and residents, to support and co-operate with the contractor, Messrs Contracta Construction Ltd, so as to complete this project on time. I know I can count on all of you in this regard,” the President added.

President Akufo-Addo recalled that, in the run-up to the December 2016 election, as expressly stated in the Manifesto of the New Patriotic Party, the party pledged to “embark on a sustainable and integrated infrastructural development programme across the country”.

Towards the realisation of this pledge with respect to Asanteman, in August 2018, the President cut the sod for the commencement of the Kumasi Roads Facelift Project, which, amongst others, includes the Kumasi Drainage and Roads Extension Project; the remodelling of the four roundabouts between Ejisu and KNUST to help improve safety and reduce the heavy congestion being experienced on the N6 highway; and an asphaltic overlay on 135 kilometres of roads within the Kumasi Metropolis to deal with the issue of potholes, and, thereby, give the roads in the Metropolis a new lease of life.

“In addition to these, a few weeks ago, in Tamale, I cut the sod for the commencement of phase 1 projects of the $2 billion Government of Ghana/Sinohydro Master Project Support Agreement (MPSA). Lot 2 of this project will see to the construction of 100 kilometres of Kumasi and Mampong Inner City Roads. In Kumasi, the affected road networks are in Manhyia, Suame, Tafo Pankrono, Asokwa, Kwadaso, Oforikrom, Subin, Nhyiaeso and Bantama,” he said.

The President continued, “A fortnight ago, Parliament approved a one hundred and fifty-five million-euro (€155 million) facility for the completion and equipping of the maternity and children’s block of the Komfo Anokye Teaching Hospital, a project which has stood uncompleted for well over forty (40) years.”