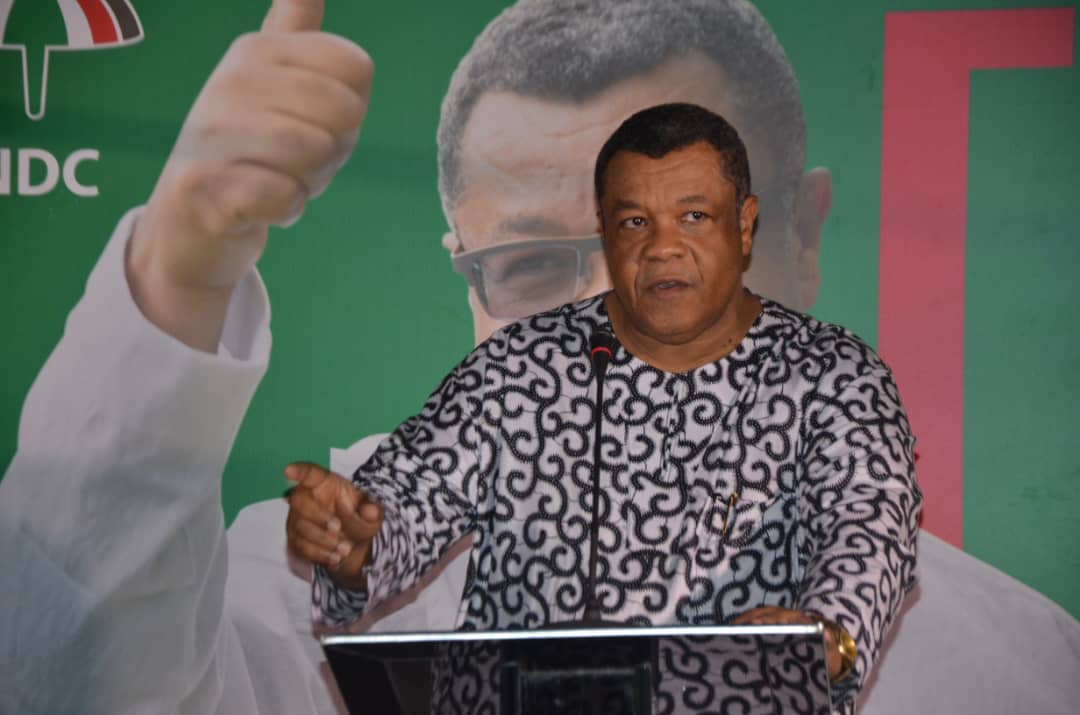 A flagbearer aspirant of the National Democratic Congress (NDC), Goosie Tanoh, has said there are viable reasons to reopen the just ended process for picking of nomination forms.

The process closed amid concerns by eight of the 12 aspirants that the nomination and filing fees set by the National Executive Committee (NEC) breached the party’s constitution.

In a statement issued on Wednesday, Mr Goosie Tanoh said there are at least two political grounds for reviewing and restarting the primaries process, an important part of which was ended on Tuesday.

“NEC seeks to impose filing fees that prevent almost all members of the party from offering themselves for leadership and is thereby denying the entire Electoral College the opportunity to vote for Contestants who cannot raise such large sums of money in such a ten-day period,” the release indicated.

Read the full release below.

NDC GUIDELINES FOR PRESIDENTIAL PRIMARIES & THE GOOSIE 2020 CAMPAIGN: FORWARD EVER!

A. Goosie Tanoh is not withdrawing from the race for the flagbearer position of the NDC.

1. The campaign has chosen not to participate in an unlawful electoral arrangement that tramples the rights of millions of Party members.

2. We will continue to fight for the empowerment of ordinary branch members and the accountability of NEC and other higher Party organs to Party members.

3. We will use the NEC management of the campaign to illustrate the deep malaise in our Party; explore ways in which we can cure it, and encourage the grassroots to join hands to defend social justice.

4. We will also take whatever steps political or legal to protect our interests and the interests of the party masses.

B. We believe there are three legal grounds for halting and reviewing the Primaries process.

i. There have been 3 different responses from NEC to this procedural requirement. Some NEC members claim that the Council was indeed consulted (This is a lie).

ii. Others say that since the Council does not have the power to veto NEC decisions consultation is only a formality (Another lie and demonstration of disrespect for party constitution).

iii. Others argue that since NEC has not yet appointed a Council of Elders it has no obligation to consult them (So why don’t they appoint the council so they can fulfil the constitutional requirement?)

3. NEC is showing bias in its management of the Primaries process: A number of NEC members including the Chairman and the General Secretary have made public declarations of support for the candidacy of HE John Mahama.  With the level of demonstrated bias, other contestants simply cannot trust NEC to run the Primaries in a free and fair manner.  It makes sense to put some other impartial body such as the Electoral Commission in charge of the process.

C. There are at least 2 political grounds for reviewing and restarting the Primaries Process.

1. NEC seeks to impose filing fees that prevent almost all members of the party from offering themselves for leadership and is thereby denying the entire Electoral College the opportunity to vote for Contestants who cannot raise such large sums of money in such a ten-day period.

i. The deeper issue is how the NDC Funds itself. A party can choose Elite Funding, where a handful of wealthy individuals (typically corrupt public officials and their private business associates) kick-back to the Party from state contracts.  Alternatively, a Party can choose Democratic Funding where the ordinary members of the party provide funding (through dues, income earning initiatives, and communal fundraising) with individual donations playing a supplementary role. We reject Elite Funding; It creates arrogant patrons / “big men” on the one hand and dependent “foot soldiers” / “agents on the other, breeds corruption and is unsustainable among many ills

ii. O4GH believes Party members should pay dues and should undertake political fundraising activities. In our travels around the country to meet members of the Primaries’ electoral college, we have proposed a figure of GHS1 per week (or equivalent in goods or time).  With a membership base of 2 million, this would yield GHS 96 million annually or GHS 384 million within every 4-year electoral cycle.  These funds would be sufficient to cover all legitimate recurring Party costs – including election campaigns. These sums could be invested in income-generating activities.  They can be used to secure Party borrowing. They can be supplemented by additional fund-raising drives and private donations.

iii. In addition to democratising our fundraising, we need to rethink our primaries process so that it is more efficient, less expensive, and focused on what is really important for our future. For example, we can eliminate the individualistic process where candidates criss-cross the country in a haphazard way disrupting voters’ work and other commitments. The Party should be proactive.  It should ask candidates to submit video or text manifestos in a prescribed format to the Elections Directorate by a given date for reproduction and distribution to all members of the Electoral College or to the Public with room for a number of updates during the course of the campaign.  The Party should organise moderated debates at Constituency, Regional and National levels for all members of the electoral college so they can hear directly from and interact with candidates about their priorities, policies and programmes in order to decide how to vote.

2. NEC seeks to impose an unreasonable Election timetable on the Party: NEC appears to be in a desperate hurry to conclude the Primaries.  Consider:

i. NEC has jumped critical activities (some constitutionally mandated) that one would expect of a new NEC; things like issuing the Congress communiqué, completing the appointment of NEC members, Secretariat directorates and bodies such as the Council of Elders and publishing their priorities and plan for their 4-year tenure of office.  All these should logically take precedence over primaries.

ii. NEC cannot spare 2 weeks to give the Council of Elders an opportunity to review and comment on proposed Guidelines (and spare the Party the embarrassment these Guidelines have caused).

iii. Congress gave up to March, yet NEC proposes to do this in January even though they indicate they have not raised the money

iv. The only theory that explains this and NEC’s other bizarre behaviour is that NEC members or the forces behind them have decided who they want to emerge as victor from the Primaries and they have concluded that a lengthy campaign is not in their interest because it gives the other aspirants time to catch up.