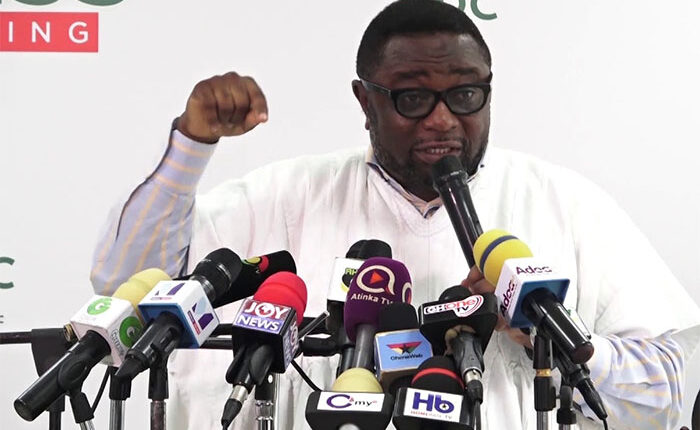 The opposition NDC has kicked out a number of proposals by the Electoral Commission (EC) for effective management of future elections.

Among the 16 proposals adopted at an Inter-Party Advisory Committee (IPAC) meeting which the NDC boycotted were the 3 pm closing time on election day and regional collation centres.

But the NDC believes closing elections two hours earlier would disenfranchise a lot of people even though the EC explained it would allow for early counting and collation of results.

At a press conference in Accra on Thursday, May 20, 2021, in reaction to the Election 2020 IPAC assessment workshop held on 18th and 19th May 2021, the Director of Elections of the NDC, Mr Elvis Afriyie Ankrah, listed the NDC’s disagreements on the 16 proposals.

The NDC further justified the reason for boycotting the recent IPAC meetings.

The NDC said it finds the proposal by the EC to change the closing time of polls from 5 pm to 3 pm “baffling and mind-boggling”.

The party said the same time has produced desired results since 1992.

They have therefore questioned why the EC would “go for a poorly thought-through alternative which is bound to disenfranchise eligible voters and create needless problems for our electoral system.”

The party said the current arrangement of closing polls does not require any fixing.

“Like the Chairperson said in her speech, ‘if it ain’t broke, don’t fix it’”.

The party said the law requires the Commission to put in place mechanisms to ensure that at any time that citizens become eligible to vote, they can be registered.

He added that political parties cannot employ permanent agents at their district offices to observe the registration of eligible voters all year round.

Even though the NDC lauded the EC for the proposal to have a year-round exhibition, they said it cannot be a substitute for the periodic exhibition exercise of the voter’s register that is normally done after voter registration.

The NDC said the proposal to have the entry point of data done at Constituency Collation Centres will introduce another opportunity for rigging through hacking and other means of manipulation of the results.

“The way to build further efficiencies into the collation process and eliminate inaccuracies is to hire and train competent EC staff to ensure accurate data entry and collation and not to throw away the time-tested practice of collation at the national level.

They are of the view that data entry and collation must be done at the constituency level and sent to the national collation centre for aggregation by the Returning Officer and with the participation of political party representatives.

They believe this will ensure accuracy and transparency in the aggregation of constituency results for free and fair election results declaration.

The party said over the years, IPAC has served Ghana as a platform where ideas are shared on various issues before the EC takes substantive decisions on critical electoral matters.

The party was of the view that the current leadership of the EC has “turned IPAC from a consultative and consensus-building platform to an information-sharing platform where the EC only comes to impose its decisions on IPAC without room for meaningful deliberations and exchange of ideas”.

“It became so bad to the point that the EC even announced publicly that IPAC had agreed to the decision to compile a new register for the 2020 elections when the issue of a new register had not even been discussed at the said meeting,” Mr Afriyie added.

He said these issues coupled with the non-equitable voting arrangement at IPAC meetings, “is the reason why we have taken a principled position to boycott IPAC until the right changes are effected to ensure fair and meaningful deliberations at IPAC”.

On the other hand, the party has suggested reforms that they believe would ensure a better election process in Ghana.

The party said it has constituted a committee to come up with a compressive document on electoral reform proposals.

Among the reforms they seek are: