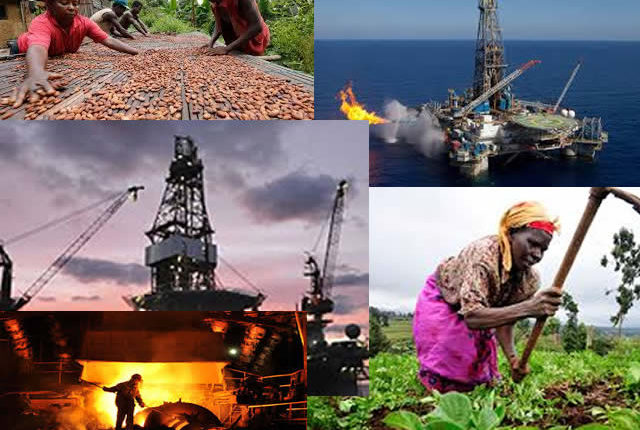 Ghana’s economy is on a broad path to recovery with indications of better growth than what has been predicted by economic watchers, Economic Analyst at Databank Group, Courage Boti, has said.

In the latest Summary of Economic and Financial Data for November 2020 released by the Bank of Ghana, the Real Composite Index of Economic Activity (CIEA) had defied the COVID-19 pandemic and risen to 10.5% in September.

A year ago within the same period, the Real CIEA index was 4.2%.

Mr Boti told theghanareport.com’s David Apinga that the “index may be increasing slightly” by the end of the year.

According to the Monetary Policy Analysis Division of the BoG, the CIEA tracks the Gross Domestic Product (GDP) very closely and is taken by the BoG as an excellent indicator of business confidence.

It contains several indicators assigned with figures and the weighted average is computed. So, when the CIEA index increases it means the economy is expanding and vice-versa.

Besides the GDP which is released periodically by the Ghana Statistical Service (GSS), the Bank of Ghana (BoG) also uses the (CIEA) to guide the Bank’s Monetary Policy Committee.

The last CIEA data released by the BoG was in May 2020. 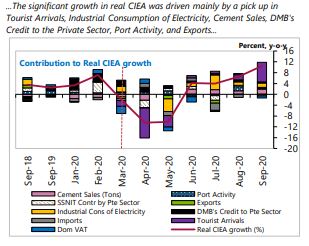 The recent index shows a bounce in economic activity at levels last recorded in December 2019.

Mr Boti was confident that “the economy is on course to recover and then the overall growth for the year 2020 would be stronger than what the Ministry of Finance projected and potentially even higher than the [GDP growth of] 2.5-3% level that the Bank of Ghana projected in the last Monetary Policy Committee (MPC) meeting before the recent”.

Whilst the World Bank expects growth to average 1.7 percent over the medium term, the International Monetary Fund (IMF) is forecasting a GDP growth rate of 0.9% for Ghana this year, according to its October2020World Economic Outlook Report.

During the intense period of COVID-19 in the country in March and April, many companies had to shut down, downsize their workforce or digitise operations. Several companies suffered a negative impact which eroded revenue.

For a very long time, the import-dependent country took a break on huge volumes of goods arriving from abroad for domestic consumption.

Most of those companies that closed or were producing at half-capacity or below optimal capacity have returned to operations.

Construction activities are ongoing all around the country including the government’s ‘Year of Roads’ programme, the manufacturing sector has bounced and credit to the private sector is significant.

“Those are the things they have been pointed as sectors that have picked up significantly,” Mr Boti explained reasons for the huge jump in the Real CIEA index. “Contractors who were owed for so many years are being paid in the run-up to the elections”.

Additionally, there has also been an increase in liquidity in the system following the banking sector clean-up, government stimulus packages, payment of bailouts, slash in the Monetary Policy Rate (MPR) and increase in money supply has resulted in the growth currently being witnessed.

“Under these conditions, there is so much lack in the system, the economy is growing below potential with a huge output gap and so any such liquidity injection will enhance growth more than causing inflation,” he noted, while adding that currency in circulation outside the banking system has grown to about 42% than the same period last year and this is impacting on growth.

Christmas and New Year festivities are approaching where retailers record peak sales. Already, there are indications of inventory activity for several businesses seeing an upsurge.

With retailers sensing a demand for an increase in consumption ahead of the yuletide they are gearing up to cash in.

Mr Boti stated that from the from a Bank of Ghana survey both consumer and business confidence is increasing which confirms inventory accumulation.

Ghana is heading to the polls on December 7. It is common for the incumbent government to implement huge infrastructural projects in the build-up to the polls.

Mr Boti agrees that election periods record huge expenditures targeted at projects. If these are targeted at construction and critical sectors, it translates into an economic expansion.

“The trend has been that growth normally tends to be strong in election years probably 2016 was an exception because we saw a much weaker growth,” he pointed out.