The 2020 NDC flagbearer, says the NDC government would organize another economic forum aimed at building consensus for socio-economic development program.

He christened it Senchi II forum, after the first organized by the NDC in 2014 under his tenure.

The NPP was absent, explaining the forum was a mere public relations gimmick. The four-day forum ended with a report detailing a 22-point resolution.

In March 2019, John Mahama suggested to the AKufo-Addo government to consider a Senchi-type of forum following another round of the cedi’s depreciation against major trading currencies. 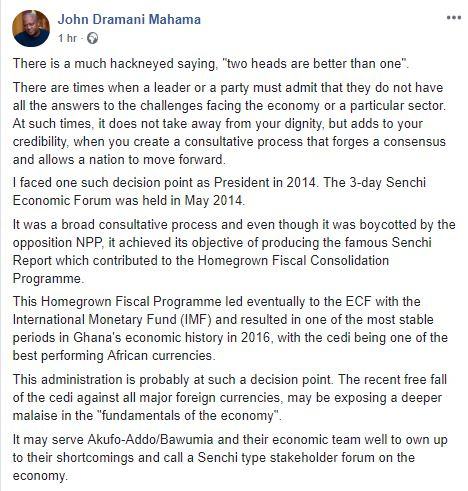 Mahama takes on Akufo-Addo on the economy

He says the current government has squandered all buffers the NDC government set up to absorb the shocks of economic downturn and accused his political opponents of mismanaging the economy.

“All the talks about our political opponents about they being better managers of the economy is a myth”, Mahama stated.

Speaking in a synchronized Media Interviews on some selected Accra based Radio Stations today, he alleges that the Sinking Fund, and the Infrastructure funds buffers the NDC bequeathed to the NPP government had been squandered.

This and other allegations he claims has led to the economy taking a nosedive, even though the interviewer drew Mahama’s attention to the effects of the COVID 19 and its impact on the economy, Mahama stated “the economy was already suffering even before the COVID 19 Pandemic hit”.

Among many allegations, the former President also alleged that the country failed to meet its revenue targets for 2019 and for which the government borrowed huge amounts of money from the two commercial banks to shore up its revenue figures.

“What they did was criminal, Mahama stated, failing to name the two commercial banks which lend money to the government.

Mahama, also stated that this government has received a lot of windfall revenues from the oil sector and that the government did nothing to warrant the continued touting of its economic progress.

“The oil revenue windfall was a result of the Ten Two oil fields on which I worked on,” he added and noted further that

In a wide-ranging interview cutting across several sectors, former President Mahama touched on his party’s manifesto and what they will do differently if given the opportunity.

He regurgitated earlier campaign promise of legalizing Okada, the big push of $10 billion, soft loans for Small and Medium Scale Enterprises (SMEs), and creating over 1 million jobs with the first term of his government.

He called the ‘1district 1 factory’ (IDIF) a scam and a program that was not well-thought-out.

Asked, what would he do differently since he had 8 years in power. He turned his guns on his political opponents and questioned what has the President done in the education sector as example.

On the energy sector and the notorious energy crisis known locally as ‘dumsor’, Mahama said contrary to the NPP propaganda, it was the NDC government that ended dumsor.