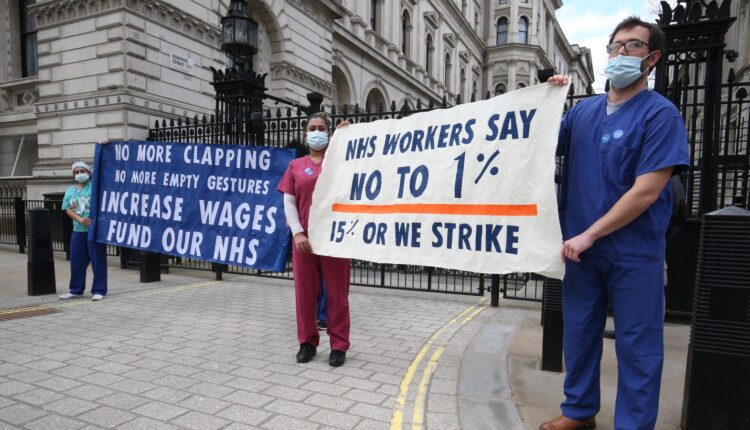 NHS workers in England will get a pay rise of 3% backdated to April 2021, the government has announced.

Those receiving the increase include nurses, paramedics, consultants, dentists and salaried GPs.

They are being recognised for their pandemic contribution during an “unprecedented year”, says the Department of Health and Social Care (DHSC).

But some unions including the Royal College of Nursing (RCN) have described the sum as “shambolic”.

The RCN added that “the profession will not take this lying down”.

In a statement, Health Secretary Sajid Javid said: “NHS staff are rightly receiving a pay rise this year despite the wider public sector pay pause, in recognition of their extraordinary efforts.

“We asked the independent pay review bodies for their recommendations and I’m pleased to accept them in full, with a 3% pay rise for all staff in scope, from doctors and nurses to paramedics and porters.

“We will back the NHS as we focus our efforts on getting through this pandemic and tackling the backlog of other health problems that has built up.

“I will continue to do everything I can to support all those in our health service who are working so tirelessly to care for patients.”

The government initially offered a 1% pay rise which was firmly contested by medical unions and regarded as “insulting” by NHS workers.

But on Wednesday evening, DHSC confirmed they have accepted the recommendations of the NHS independent pay review bodies in full and will be increasing their offer to 3% in line with the “unique impact of the pandemic” on the health sector.

The government says that for the average nurse, this will mean an additional £1,000 a year.

The extra sum is expected to equate to around £540 for cleaners and porters.

Health minister Helen Whately added: “Our NHS staff have worked incredibly hard to fight the pandemic for over eighteen months and I’m glad to confirm we are accepting the pay review bodies’ recommendations in full this year, so staff in their remit will receive a 3% pay rise.”

Healthcare staff have called for a real-terms pay increase.

And some may be disappointed that the amount falls short of the offer from the Scottish government, with NHS workers north of the border set to receive a 4% increase backdated to December.

Unison general secretary Christina McAnea said the pay award was “an improvement” on the government’s “earlier, miserly 1% proposal”, but that the sum “falls short of what NHS staff deserve after the past 16 months”.

She added: “It’s less than the wage rise given to Scottish health colleagues and not enough to protect the NHS. Porters, cleaners, nurses, paramedics and other health workers have waited for months for what they hoped would be a fair deal.

“Ministers could have paid up last year if they really valued the NHS. Instead, staff have been made to hang on until the summer – long after their wage rise was due.”

And the Royal College of Nursing interim general secretary and chief executive Pat Cullen said: “After a shambolic day, comes a shambolic announcement.

“When the Treasury expects inflation to be 3.7%, ministers are knowingly cutting pay for an experienced nurse by over £200 in real-terms.

“Hospitals and other parts of the NHS are struggling to recruit nurses and healthcare support workers. The Government has been warned that many more are on the verge of leaving. With today’s decision, ministers have made it even harder to provide safe care to patients.”

The government was facing a backlash after failing to announce an expected pay rise for NHS staff in England despite confirmation of the offer being widely expected on Wednesday.

Ms Whately delivered a ministerial statement on the NHS in the Commons on Wednesday afternoon, but her opening statement omitted any mention of the pay dispute.

“Less than an hour ago there were competing briefings on what the deal was going to be but it turned out to be nothing,” the Labour minister said.

But while the expected announcement failed to materialise in the Commons, the government did answer calls for the offer to be published before MPs break up for the summer recess on Thursday afternoon.