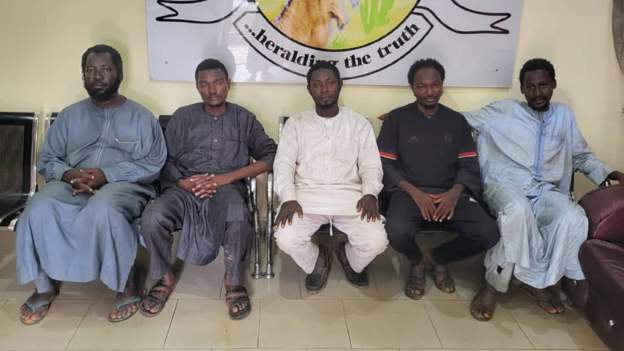 Gunmen in Nigeria who carried out a notorious attack on a high-speed train in March have released five more of the passengers they were holding hostage – with an estimated 30 others still believed to be being held captive.

It has never been clear exactly how many people were abducted when the vital rail link between the capital, Abuja, and the northern city of Kaduna was mined on the evening of 28 March, forcing the train carrying 362 passengers to stop.

At least eight passengers died during the attack and some 168 people were reported missing afterwards by the state rail company – though some may have managed to return home without telling the authorities.

In April photos allegedly showing 62 people being held hostage by the gunmen were released on social media.

He said the men, including a university professor, came to his office last Saturday to thank him for his earlier help – and he took photos of them and recorded video messages of them.

Mr Mamu said he was no longer acting as a negotiator, saying the government had failed to support his efforts and he had been getting death threats.

Several other captives have been freed over the last few months – more than likely after ransoms were paid by their families.

“As I keep saying when government does not take charge of situations like this, you will only allow desperate family members to negotiate the release of their loved ones – and by implication certainly ransoms will be paid,” Mr Mamu said.

He appealed to the government to intervene for those who remained in captivity after four months, saying their families were probably too poor to help them.

“The government needs to consider these glaring realities and came to the aid of these remaining victims as soon as possible.”

Nigeria is currently facing rising insecurity and a kidnapping for ransom crisis.