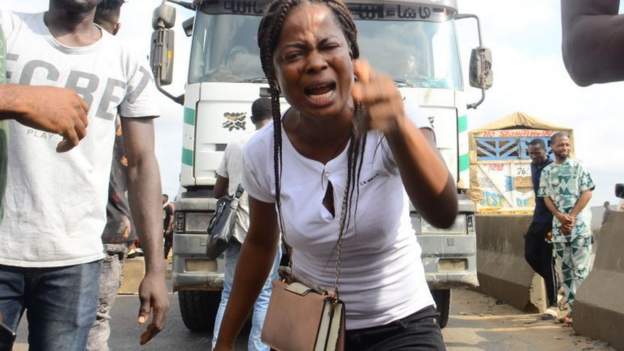 Nigeria’s Minister of Information Lai Mohammed has dismissed as fake the leaked report of an inquiry which found that the armed forces had carried out a massacre at a protest against police brutality in the main city of Lagos last year.

Lai Mohammed told journalists in the capital, Abuja, that the allegations were “tales by moonlight”.

“Never in the history of any judicial panel in this country has its report been riddled with so many errors, inconsistencies, discrepancies, speculations, innuendos, omissions and conclusions that are not supported by evidence,” he said.

The report into what happened at the Lekki toll gate was leaked last week and is yet to be made public.

The leaked report said that the armed forces intentionally shot anti-police brutality demonstrators at the Lekki toll gate in October 2020, and then tried to cover it up.

It called the killing of 11 people a “massacre”.

Mr Mohammed denied there was a massacre and said it was shocking that allegations made by Nigerians to the panel were merely compiled into the report without investigations.

“That report is nothing but the triumph of fake news and the intimidation of a silent majority by a vociferous lynch mob,” he said.

Tens of thousands of Nigerians took to the streets in October last year calling for the Special Anti-Robbery Squad (Sars) police unit to be disbanded.

The #EndSars protests rocked the country for two weeks. The police unit had been accused of robbing, attacking and even killing people.