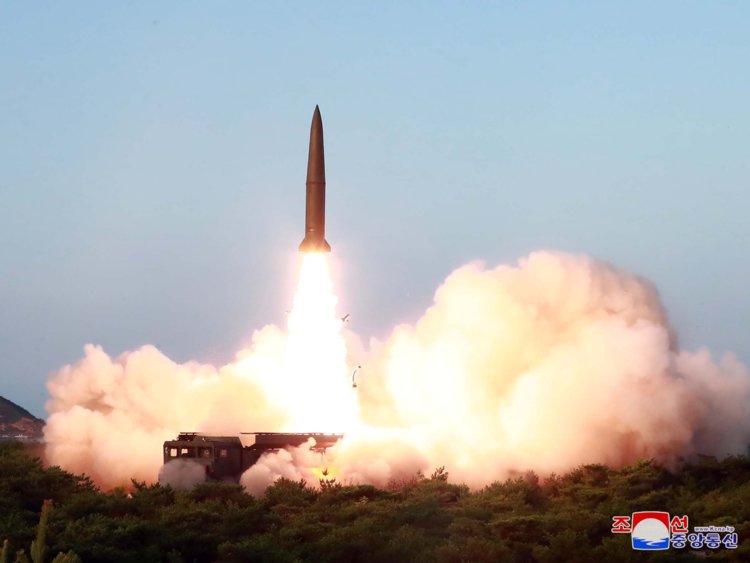 They were fired from South Hwanghae province across the peninsula into the sea to the east, a statement said.

The US said it was monitoring the situation and consulting with South Korea and Japan.

On Tuesday, North Korea’s foreign ministry released a statement, seemingly timed with the latest launches, accusing the two allies of “playing all sorts of tricks” to justify the military exercises and said their “aggressive nature” could not be covered up.

The North described the exercise as “an undisguised denial and a flagrant violation” of the recent talks between the US and North Korea (DPRK).

“We have already warned several times that the joint military exercises would block progress in the DPRK-US relations and the inter-Korean relations and bring us into reconsideration of our earlier major steps,” the statement warns.

North Korea has been the subject of a series of US and international sanctions over Pyongyang’s development of nuclear weapons and a series of missile tests.

What do we know about the missile tests?

According to South Korea’s military, the North’s launches on Tuesday appear to be short range ballistic missiles, flying 450km (280 miles) at an altitude of 37km.

In its statement Pyongyang did not explicitly mention the missile launches but said that in response to military exercises in the South, the North was “compelled to develop, test and deploy the powerful physical means essential for national defence”.

Over the past two weeks, the North test-fired what South Korean officials said appeared to have been a new type of short-range missile.

Last Friday, two missiles landed in the Sea of Japan, also known as the East Sea, according to South Korea’s Joint Chiefs of Staff (JCS).

On Wednesday, the North launched two missiles that flew 250km and reached a height of 30km before landing in the Sea of Japan, according to South Korea.

On 25 July, the North had fired two other missiles, one of which travelled about 690km.

That was the first launch since President Trump and North Korean leader Kim Jong-un held an impromptu meeting in June at the demilitarised zone (DMZ), an area that divides the two Koreas, where they agreed to restart denuclearisation talks.

What are the military drills about?

Since the end of the Korean conflict, when Washington fought alongside Seoul against the North, the US has had troops stationed in South Korea.

Seoul and Washington say the drills are defensive but Pyongyang sees them as preparation for war.

A second summit between the two leaders in Hanoi in 2019 ended without agreement.

Since then, denuclearisation talks have stalled although both sides say they still want to pursue diplomacy.