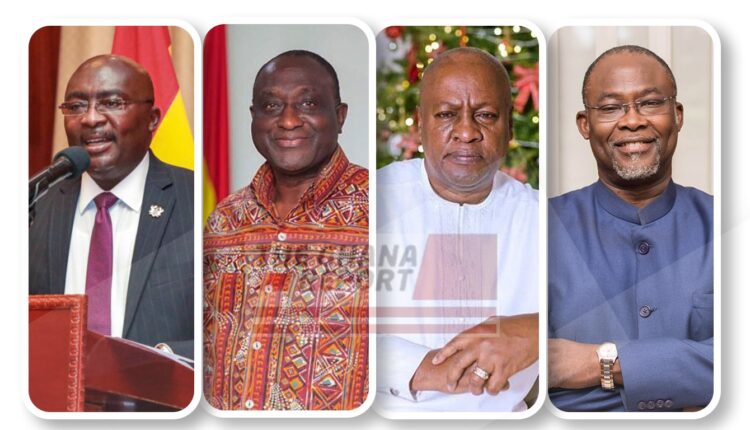 NPP/NDC Need Right Running Mates For The Battle Ahead.

The Governing New Patriotic Party (NPP), of Ghana, has fired the first political salvo with barely two years to the next presidential elections. Presidential aspirants have stepped forward, and the caveat has been issued setting sights on a third term for the NPP, sloganeered as ”breaking the eight”. This refers to the NPP’s avowed aim of breaking the jinx on the eight-year limit for the two parties which have tasted power under the present political dispensation.

The NPP quest has a log tied to its neck which threatens its ambition, and this is the current economic crisis interpreted to be largely caused by external factors. The Russia-Ukraine war is the salt rubbed into the injury from the Covid-19 pandemic which has its ghosts still hovering around. The NPP faces the arduous task of explaining away the circumstances to acceptance of the electorate which is bearing the brunt of the harsh economic realities.

Conscious of this, candidate Alan Kyeremanten has already projected a plan that distances from the status quo in many ways, seeking to position his campaign without any political baggage. Despite the economy at the heart of the forthcoming elections, the NPP presents a set of aspirants who are no pushovers. They are achievers in their own right, well-exposed, learned, and accustomed to statecraft. The one who becomes the party’s flagbearer will no doubt prove to be veritable presidential material, what is to be interrogated is the sincerity behind platitudes, because the electorate pinched by the times, is determined to choose the politician most committed to their urgent, recurrent expenditure.

The Opposition National Democratic Congress, NDC, also cannot take things for granted. The economy may not prove fortuitous to deliver victory in the polls. Whilst Dr. Kwabena Duffour and Kojo Bonsu have declared intentions to run, former President John Mahama keeps his cards to his chest though it is held in many quarters that he will contest in his party’s presidential primaries. These are men worth their salt, gifted with the power of oratory yet, they come up against the equally trenchant array of NPP candidates any of whom as flagbearers could rise to the occasion.

The likes of Vice-President Mahamudu Bawumia, Alan Kyeremanten, Dr. Owusu Afriyie Akoto, Francis Addai Nimo, Kwabena Agyepong, Boakye Agyarko, Joe Ghartey, and Kennedy Agyapong are capable of ”dodging” the economy to present themselves as distinct individuals with own agenda. That could automatically canvass core party supporters, leaving floating voters as the main votes to catch. The debate will be savvy, and by stating without admitting that the NDC’s line-up is three horse race for now, it is important for the party to examine who can be the best running mate to Dr. Duffour or John Mahama, assuming the NPP pairs Alan with Bawumia.

The opposition in Ghana may also have to consider a running mate likely to send shivers down the spine of the party which is already in the driving seat. It will be about the bigger picture winning strategy or the narrow path that could lead to an implosion. Four names have surfaced as the ”politically smooth” quartet whose partnership with an NDC flagbearer could provide a winning ticket, aside from the fact that they are themselves worthy of the presidency. It will surprise none if any of them decides to go for the top job. These are Prof. Naana Jane Opoku Agyemang, Goosie Tanoh, Dr. Ekwow Spio-Garbrah, and Leslie Mensah Tamakloe.

Leslie Mensah Tamakloe is an unknown quantity but in his circles, he is acknowledged as astute in business and a performer in what he does.  Goosie Tanoh provides the spine for the party’s cadres who think it is time to have a representative in the higher echelons and rewire the original brand in the full mechanism of the party. Dr. Ekwow Spio-Garbrah, a top international civil servant who was the predecessor of Alan Kyeremanten as minister for Trade and Industry, could be a handful for all the NPP contenders in any debate. The gender alternative comes with Prof.Naana Jane Opoku Agyemang who is the presumptive running mate due to her being chosen to pair with Mahama in the previous elections.

Leslie Tamakloe gives the NDC’s voting world bank, the Volta region, an opportunity at the very top after the party’s founder Flt. Lt. Jerry John Rawlings ended his presidential term in 2001. The other three hail from the central region which vacillates between the NPP and the NDC. However, the choice of any of the three could put yet another stamp on the affinity NDC has built over the years with the region to enlist massive support. Should Alan Kyeremanten be chosen as NPP’s flagbearer, then the element of Dr Spio-Garbrah on the other ticket will give the governing party a good run for its money. This is not to say that the others cannot match up the equation, they are equally great and it all depends on how their party markets them.

The NPP touts Vice-President Bawumia as the best of the vice-presidents Ghana has seen in the fourth republican democracy of Ghana. It is a strategic communication to grant him the headstart, should John Mahama become the NDC’s flagbearer. The latter’s bid will be strengthened by who he chooses to be his running mate, for the ambiance that reverberates in people and across the international community, could be a masterstroke for the opposition.  A Dr. Duffour ticket threatens to wipe votes in the Ashanti region, the NPP’s political stronghold. For the NPP, its first contender in the pending elections is the economy. It might have come at the wrong time for the party, but how it wriggles out of that tight corner will all depend on feasible and novel policies. By the time the dust settles, any of the faces in this story could be Ghana’s new president and vice president. Meanwhile, a strong independent candidate is lacing boots with an innovative program likely to cause a stir and sensation within traditional quarters, should the majority of the people of Ghana switch from both camps. Communication will aid that movement to make a difference.