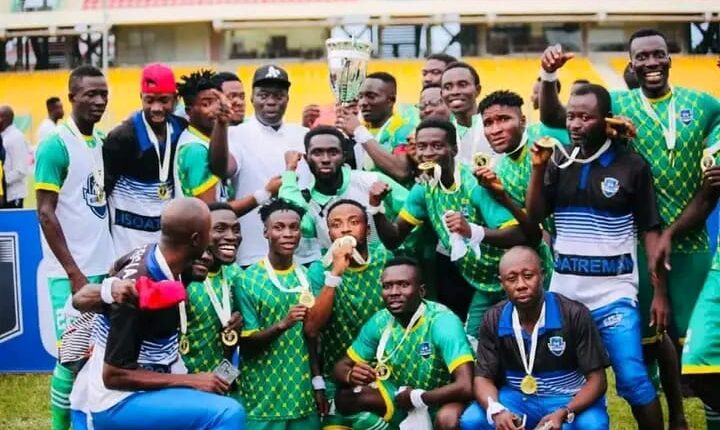 The Nsoatre Township in the Sunyani West Municipality was greeted with spontaneous jubilations when the Nsoatreman Football Club (FC) qualified for the 2022/23 Ghana Premier League season.

Sports fans and enthusiasts who could not hide their joy, filled the street of the town to jubilate the club’s triumphant and historic entry into the nation’s top-flight division for the first time in their history.

Hundreds of electrifying young people, including taxi drivers were not left out of the jubilation, as they were sighted on the street of the town dancing to brass band music and other tunes after the club won against the Tamale City FC in a Zone One playoff game at the Accra Sports Stadium on Tuesday.

The 98th-minute goal from Striker Charles Asante earned coach Boniface Kutigsi Ayipah’s Nsoatreman FC side a 2-1 victory over the Tamale-based team in an extra time of play to secure qualification.

The playoff was honored after the two teams could not be separated during the regular season after they were tied on 71 points and head-to-head after they both won their league meetings by a single goal.

During a visit to the town, the euphoria was so great, as some major pubs were filled to capacity.

Yaw Kusi Boahene, a resident said the club’s victory had greatly bonded social tides, saying “we are happy the club has qualified to play the premier league”.

“Our qualification will boost trade and commerce and spur rapid socio-economic growth and development in the area because at least we will host visitors every week in the next premier league season”, Kofi Amoah, a trader indicated.

They will join fellow debutants Samartex FC and Kotoku Royals as the new entrants for next season’s Ghana Premier League campaign.