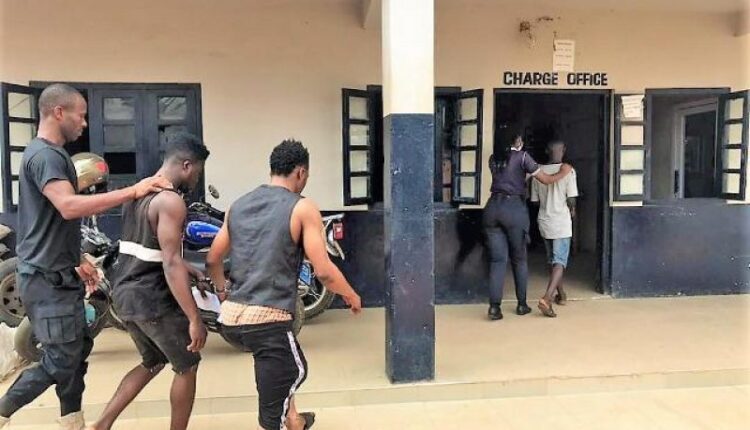 Three suspects involved in clashes at Ntonso in the Ashanti Region on Monday, July 5, have been granted bail by the Mamponteng District Court.

The court presided over by Thomas Soyori granted a bail sum of GH₵ 6,000 to the three accused persons with two sureties each.

The court believed that the accused persons had been in police custody for almost three weeks and were also facing provisional charges, hence the bail.

Also, the court is yet to take their plea to the charges levelled against them.

The prosecutor Inspector Abdul Rahman Zakaria informed the court that the three other persons believed to have taken part in the riot have been identified as Khalifa, Tuga, and Alinga.

He assured the court that the investigation team would soon locate their hideout.

About six people suffered injuries in a fight between some residents of Ntonso in the Kwabre East Municipality of the Ashanti Region.

The clash is said to have started on Sunday evening, July 4, at a drinking pub known as No Size Pub.

Reports from the area indicated that the violence was renewed on Monday morning (July 5, 2021) when some youth, supposedly from the Zongo community, vandalised shops belonging to others.

They also smashed windscreens and mirrors of vehicles plying the Kumasi-Mampong Road, bringing traffic on that stretch to a halt.

This situation prompted retaliation from those who had perceivably been wronged.

A full-on confrontation then ensued, resulting in the destruction of more properties, including cars.

The Municipal Chief Executive for Kwabre East, Nana Osei Assibey Bonsu, noted that the initial report suggested that the clash was due to a drinking spot operating beyond the mandated hours.

“They started vandalising whatever they saw, hitting some kiosks and whatever they see. They attacked some people from their homes and a lot of things,” he said.

Consequently, some schools in the area were closed, as parents rushed to the Ntonso R/C Primary, a teacher Justina Appia Kubi told the media.

Police were deployed to ensure that the situation was contained to prevent any further escalation.

Pockets of clashes in the Ashanti Region

Pockets of clashes have been recorded in the Ashanti region in the past two weeks, including bloody confrontations on campus at the Kwame Nkrumah University of Science and Technology (KNUST).

On Saturday, July 3, 2021, some students of the University Hall (Katanga) and the Unity Hall (Conti) engaged in a free-for-all fight, leaving many badly wounded.

The students attacked each other in a scuffle with broken bottles and other weapons, including machetes, during a screening process for SRC elections.

Riots at Ejura have also dominated the headlines for weeks after two people were shot dead and six injured during a protest.

The riots were sparked by the death of social activist Ibrahim Mohammed, popularly known as Kaaka.

A three-member committee was constituted by the Minister for the Interior, Ambrose Dery, to probe the disturbances after the military allegedly opened fire, leading to the casualties.

A joint military and police team had been deployed to maintain calm.

The committee has since handed over their recommendations to authorities.