One dead in fuel tanker accident on Tema Motorway

A fuel tanker crashed into two passenger vehicles leaving one person dead and several others injured.

The Tema-bound fuel tanker, according to eyewitnesses, veered off the road to the Accra-bound lane of the Tema Motorway and rammed into two oncoming vehicles.

The tanker driver lost control while attempting to dodge a vehicle that had suddenly exited another road onto the motorway, a few meters from the Ashiaman overhead bridge.

The incident occurred on Friday, June 4,

“It was drizzling when we were coming, so I decided to slow down. Just after I passed the overhead bridge, I saw the trailer, and it looked like it was trying to turn around, and just before I could blink an eyelid, the trailer had crossed the median of the road into our lane….” 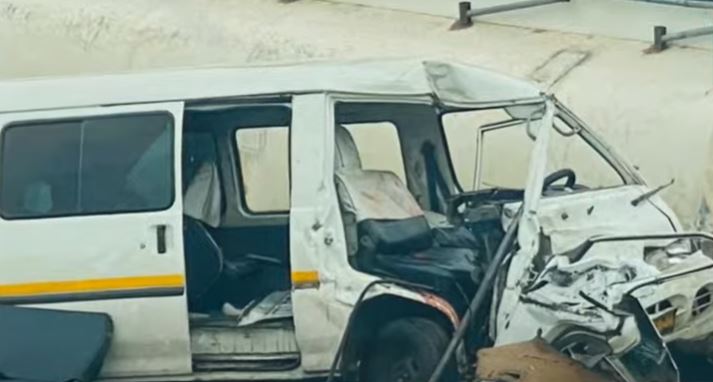 “So, I dodged it, but the vehicle behind me couldn’t dodge it and clashed with it,” the driver of one of the two passenger cars involved in the accident narrated.

Eyewitnesses say that other road users tried to reach the Ghana National Fire Service rescue team for more than two hours but were unsuccessful.

“We were here around 5:30 am when the accident happened, and we tried to call the GNFS, but they were not responding, so we decided to help rescue the victims. The driver and the two passengers in the front seats of the Toyota Hiace were deeply injured, but the one who died wouldn’t have died if the fire service got here on time…he bled for close to two hours,” eyewitnesses said.

The victims were sent to the Tema General Hospital.

One person was pronounced dead on arrival, and three others were in critical condition.

Others who suffered from minor injuries were treated and discharged.