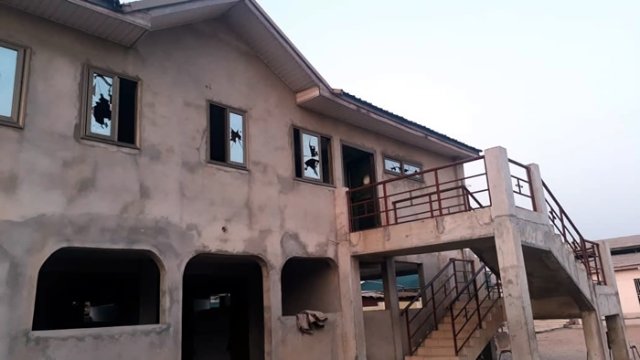 Property belonging to the self-styled prophet, Rev. Isaac Owusu Bempah, has been vandalised Wednesday, in reaction to his doom prophesies on New Year’s Eve.

The leader and founder of Glorious Word Ministry claimed God revealed to him that former President John Mahama and current Vice President Dr Mahamudu Bawumia could die this year unless they take firm spiritual actions.

He also claimed to have witnessed signs that seem to suggest that the Chief Imam, Sheikh Usman Nuhu Sharubutu, could die in 2019.

He then urged the Islamic community to pray for their spiritual leader.

The dark prophesies seem to have piqued some youth and in a viral video – which has been posted below – some agitated youths can be seen destroying glass windows, billboards and other property belonging to the popular preacher.

A pastor at the church told Joy News’ Emefa Dzradosi, Wednesday that he is sure the attack on the church was triggered by the doom prophecy about the Chief Imam

Rev. Owusu-Bempah, who has a close affiliation with the Presidency is known for predicting doom, an annual ritual many clergymen have condemned as inciting fear and panic among Ghanaians.

Meanwhile, the office of the National Chief Imam has called for calm and advised all to desist from any engagement and act that will tarnish the hard-earned image and reputation, particularly on peach and tolerance.

“…the Islamic faith remains restrained and tolerant and shun away every form of chaotic acts as the Islamic tenets does not condone intolerance.

“Islam indeed teaches us that death is inevitable and every soul shall taste death as enshrined in the Holy Quran.

Death is not bound by age or any condition of life,” a statement said.