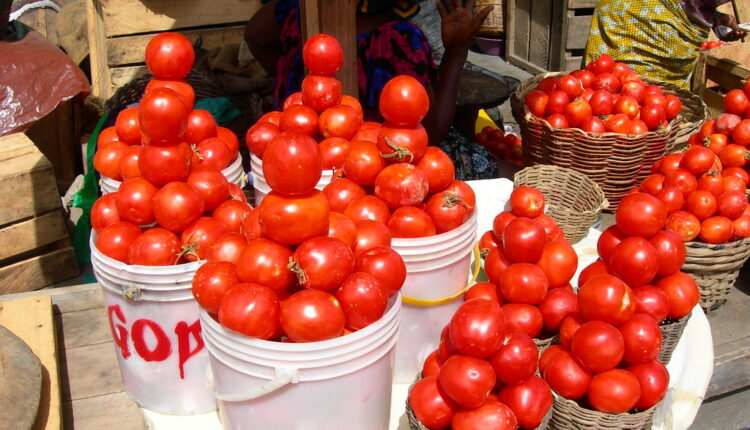 When ‘manager’, my Mrs/Madame, said the price of a paint-bucket of tomatoes had jumped up, I said “pardon?”.

This was to allow me time to think as I did not instantly understand the link between paint-bucket and tomatoes.

Somehow, she forgot that on the rare occasions that we had gone to the market together, I had waited for her in the car, like many men do, in the interest of “domestic peacekeeping”.

So I could plead justifiable ignorance of market terminologies/vocabulary which I do not use often, as well as prices!

‘Manager’ explained that a paint-bucket was the unit of measure for tomatoes at the market. She added that two weeks earlier, a paint-bucket sold for GH¢20.

Now, a paint-bucket of tomatoes had reached GH¢50 with more room for improvement into the skies.

Other units of measure include ‘olonka’ and “margarine-tin”. While I have no problem with margarine-tin, I am not sure which language group olonka belongs to.

Olonka itself has no standard. Usually, it is the empty tin of the largest size canned tomato-paste. This is fed into with margarine-tin measurements. Interestingly, there are different sizes of olonka tin-cans. So an olonka could take anything between six and eight margarine-tins!

However, meat, and to a limited extent fish in cold stores, have seen some modernity and are sold in kilogrammes/pounds.

Live chicken has a standard price for all chicken which were hatched on the same day and, therefore, have the same batch number. Weight does not matter as they are considered classmates.

The beloved salted tilapia (koobi) is priced according to sizes, ranging from two cedis to GH¢20.

While vegetables are priced by sight, fruits are counted in lots. Fresh oranges or vegetables in the morning are priced differently from the evening when they are baked and tired from the scorching sun.

Again, prices depend on the season. While they are low during the glut, they rocket to space in the lean season.

Having lived in other African countries both in East and West Africa, I know some use scales, weights and other scientific units of measure.

So prices are denominated in cash/kilogramme. Indeed, rice, plantains, tubers, tomatoes, onions and meat are all sold according to weight.

So there is a correlation between commodities and price stability based on weights.

So how come in the 21st century, we still operate with “olonkas”, “margarine-tins” and “paint-buckets” as units of measure?

My May 2018 article started as follows:

“The almost forgotten abbreviation “cwt” that we were taught in Science at school in the 1960s stood for “hundredweight”. This is a unit of measure which has 100, equivalent to 100 US pounds, or 112 (112) Imperial or British pounds.

“My experience is that while fruits/vegetables are weighed and sold by the pound or kilogramme in many African countries I have visited, Ghana does not sell fruits and vegetables by the weight, even though we do so for meat.

“Therefore, during the season of plenty, coconuts, watermelons and tomatoes (cwt), as well as perishable agricultural commodities sell cheaply.

“During the lean season a few months later, prices rocket to space. There is no canning to serve as buffer for balance.”

The lack of scientific measurements is not only restricted to markets. Skilled artisans provide services and do not have a proper way of calculating their charges.

After a mechanic has spent hours working on a car, he only says, when asked for the bill, “Master, you just give me anything!” Such discretion given to “masters” is often grossly abused by car owners who underpay artisans.

The same applies to artisans such as plumbers, carpenters, welders etc. At best, they tell you how much they bought inputs for, and ask you to give them “anything” for workmanship.

Elsewhere, time spent on the job constitutes the highest part of the total bill.

Over 60 years after independence, we have no excuse measuring commodities in olonkas, margarine-tins and paint-buckets in spite of all the advances in science and technology.

Similarly, artisans must be using a science-based way of charging and not depend on the magnanimity or otherwise of “masters”.

I submitted in an earlier article that,

“Our problem is leadership. Leaders are paid to solve problems and not talk copiously explaining why they have failed to solve problems. Leadership will be effective if it is selfless and honest with integrity.”

Leaders, lead us out of this medieval way of measuring at our markets and artisans depending on how charitable “masters” can be.