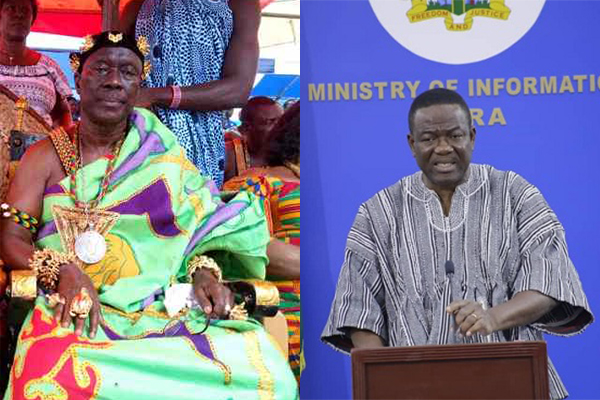 Tension is brewing in Kete-Krachi as the President of the Krachi Traditional Council, Nana Mprah Besenuna III, sues the government over what he describes as an unlawful decision to inaugurate the Nchumuru Traditional Council in contravention of the country’s chieftaincy laws.

It is the case of Nana Besenuna that the elevation of one of his divisional chiefs, Nana Obrempong Kanya II, to the position of a Paramount Chief, is an act that kicks tradition and the law in the groin.

He, therefore, went to court to seek an interlocutory injunction to restrain the government from going ahead to inaugurate the Nchumuru Traditional Council on January 17, 2020.. 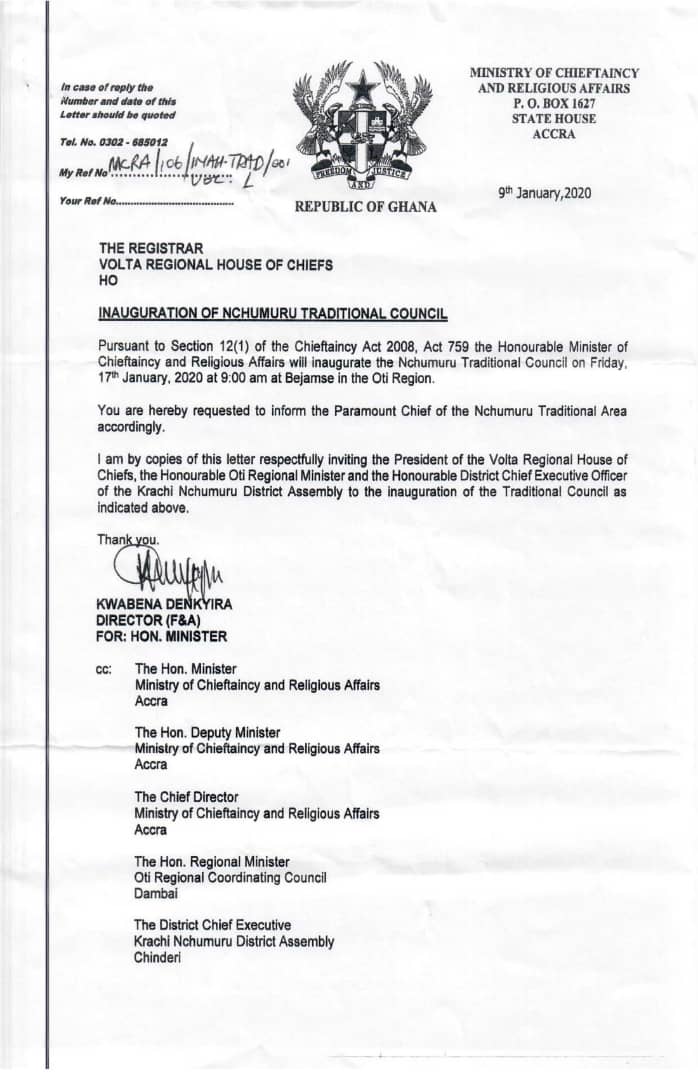 An application for interlocutory injunction filed at the High Court by Mr O.K. Osafo-Buabeng, solicitor for the plaintiff, names the Attorney General, the Minister of Chieftaincy and Religious Affairs, Nana Obrempong Kanya, the Bejamsehene of Krachi-Nchumuru, as defendants.

In spite of the court action, theghanareport.com has learnt the programme was held on January 20, 2020.

Our sources say some of the parties could not be served before Friday.

Being the President of the Krachi Traditional Council, Nana Besemuna avers that Nana Kanya is a Divisional Chief of the area and therefore does not qualify to be elevated as a Paramount Chief without the approval of the council.

The plaintiff also holds the view that the intended inauguration of the Nchumuru Traditional Council is not just unlawful, but also likely to disturb the peace of the area.

Ever since the Ministry of Chieftaincy and Culture in a letter dated January 9, 2020, announced the inauguration of Nchumuru Traditional Council there has been an uneasy calm in the Krachi Traditional Area.

In the said letter, the Director of the Ministry of Chieftaincy and Religious Affairs urged the Registrar of the Volta Regional House of Chiefs to inform the Paramount Chief of the Nchumuru Traditional Area about the event. The Oti Region is yet to have its own Regional House of chiefs after its creation in 2019.

Until recently, that designation (Paramount Chief of the Nchumuru Traditional Area) did not exist. The Krachiwura had jurisdiction over Nchurumu as its Paramount Chief.

Not satisfied with the ministry’s letter, the Krachiwura caused private legal practitioners, the Law Alert Group to write to the Ministry of Chieftaincy and Religious Affairs stating the Krachi Traditional Council’s disapproval.

Falling on a precedent, it said the Krachiwura recently elevated the Chief of Asukawkaw  to the status of Paramount Chief.

“At no point in time in the records of the Council has the status of the Bejamsehene been elevated or recommended for elevation to a Paramount Chief of an Nchumuru Traditional Area, to warrant the creation of a Traditional Council,” the letter copied to the Office of the President, National House of Chiefs, the Registrar of the National House of Chiefs, Nana Obrempong Kanya II, the Oti Regional Minister, among others said. 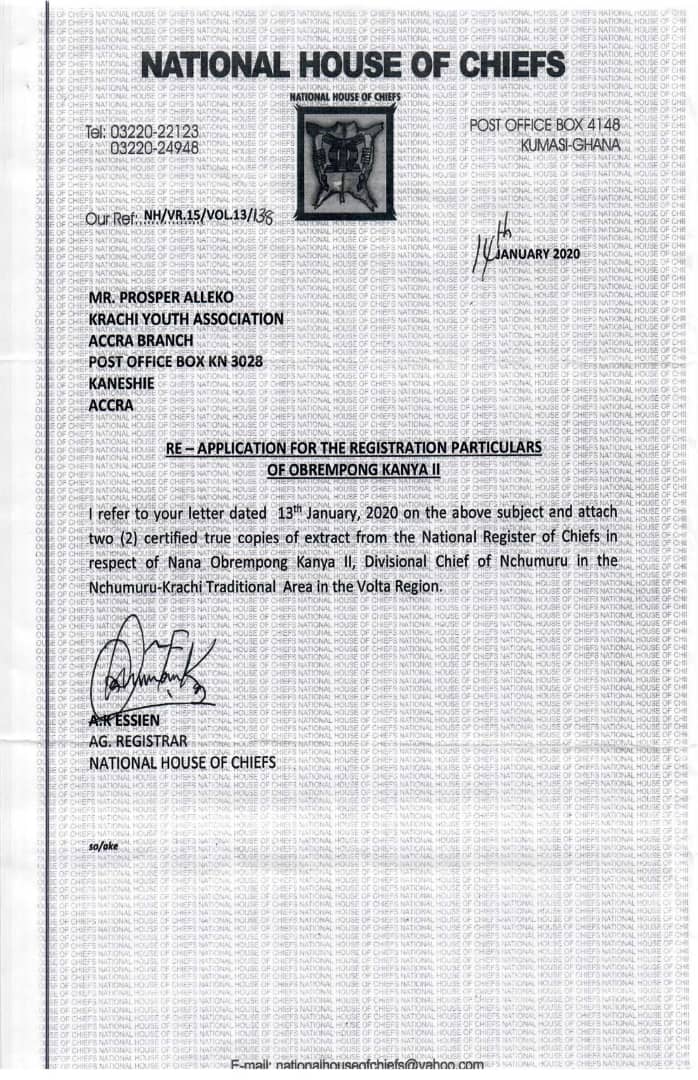 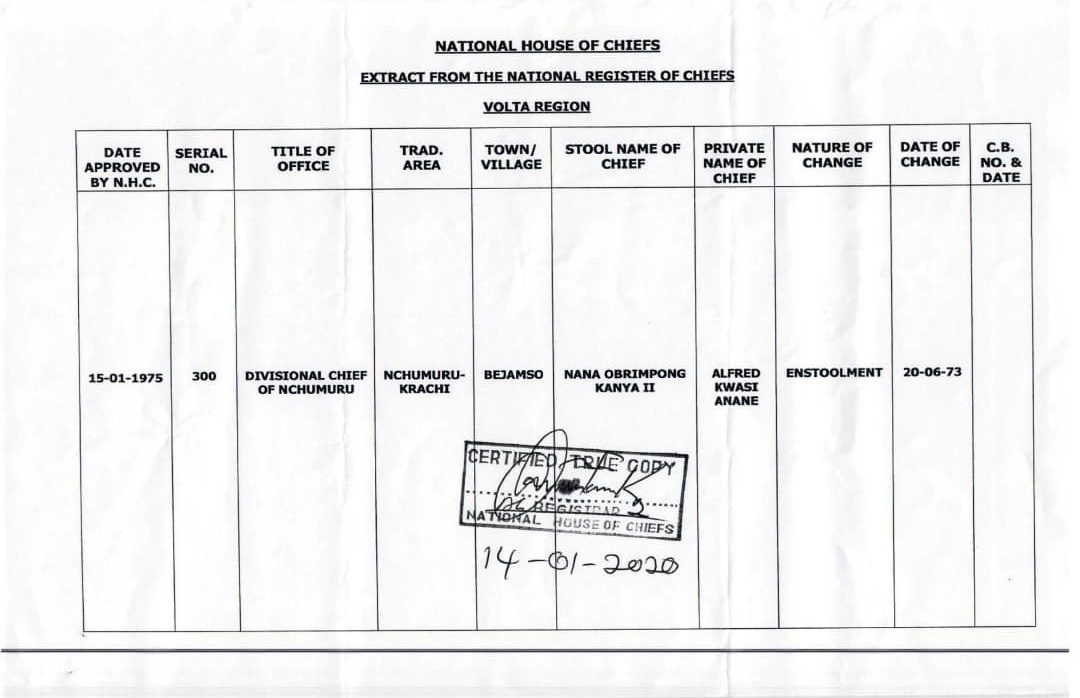 It said “the decision of the minister to inaugurate the Nchumuru Traditional Council without recourse to the Krachiwura breaches provisions of 1992 Constitution and the Chieftaincy Act.

It accused the Ministry of Culture and Religion of sidestepping appropriate customary processes required of the inauguration of a new traditional council.

Article 277 of the 1992 Constitution defines chief” as” a person, who, hailing from the appropriate family and lineage, has been validly nominated, elected or selected and enstooled, enskinned or installed as a chief or queen mother in accordance with the relevant customary law and usage.”

“My client instructs that your unlawful and reckless decision to inaugurate the so-called Nchumuru Traditional Council has the potential of disturbing the peace of the Krachi Traditional Area,” the letter said.

But on Monday, the event did take place.

Meanwhile, the Concerned Citizens of Krachi have accused the Minister of Chieftaincy and Culture of trying to foment trouble in an otherwise peaceful area with the decision to inaugurate a new traditional council.

“History, as handed to us by our forefathers, tells us that the Nchumurus are our brothers. We have lived with them on our land for years without any traditional rivalry. The interest of the Honorable Minister in trying to muddle in a hitherto peaceful area should not be allowed to go under the carpet.

“Whereas the government and peace-loving people are engaged in various activities to ensure peace, it is imponderable that the Chieftaincy Minister is directing his energy to create confusion in Krachi land,” Secretary of the group, Mr Daniel Nkrumah Lordson, said at a press conference on Saturday in Accra.

“We are hereby calling on the leadership of the ruling party NPP to demonstrate to the whole world that the party is not pursuing any grand agenda against the Krachis by bringing the Minister to order,” he said.

When the Chieftancy Ministry was contacted, it was not readily available for comments.