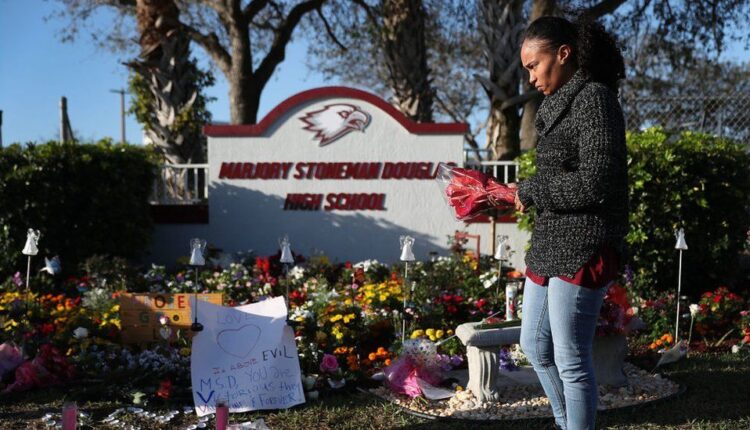 A Florida man has pleaded guilty to murdering 17 people in a 2018 mass shooting at a high school campus in Parkland, Florida.

Nikolas Cruz, 23, also pleaded guilty to 17 counts of attempted murder for those he injured in the attack on Marjory Stoneman Douglas High School.

He faces the possibility of the death penalty or life in prison.

One of the deadliest school shootings in US history, the incident became a rallying cry for gun control activists.

Mr Cruz was 19-years-old when he shot dead 14 students and three employees with an AR-15 rifle at his former school. Another 17 people were wounded.

The case will now head to a penalty trial in which jurors must determine whether Mr Cruz is spared the death penalty to face life without parole.

Judge Elizabeth Scherer has said she hopes that the case – for which thousands of jurors will have to be screened – can begin in January.

In court on Wednesday, Judge Scherer asked Mr Cruz how he pleaded to each murder.

Following the plea, Mr Cruz tearfully addressed the judge and the victims’ families.

“I am very sorry for what I did and have to live with it every day,” he said. “If I were to get a second chance, I would do everything in my power to help others.”

Mr Cruz added that he has “nightmares” about his crime and “can’t live with” himself. He also said that he believes that the US would “do better if everyone would stop smoking marijuana”.

Lawyers representing Mr Cruz had repeatedly said that he would plead guilty if the death penalty was not considered. Last week, his attorney, David Wheeler, told the judge that Mr Cruz’s lawyers were asking the court to impose 17 consecutive life sentences for the massacre.

The offer had been rejected by prosecutors, who in earlier court documents said they would seek his execution and prove that the crime “was especially heinous, atrocious or cruel”.

Following the hearing, Tony Montalto – whose 16-year-old daughter Gina was killed in the shooting – told the Associated Press that Mr Cruz’s guilty pleas “are the first step in the judicial process”.

“But there is no change for my family,” he added. “Our bright, beautiful and beloved daughter Gina is gone while her killer still enjoys the blessing of life in prison.”

March for Our Lives, a gun law reform organisation started by Parkland survivors in the wake of the shooting, said in a statement that it has “no comment” on Mr Cruz and “a guilty plea will not erase the past, and it will not bring us peace”.

“What is clear is that gun violence is a systemic crisis and a uniquely American epidemic,” the statement said.

The organisation added that it is “appalled and disgusted that policymakers continue to waffle and play games” rather than implement reforms. “We are not at peace, we are as angry and determined as ever.”

Last week, Mr Cruz pleaded guilty to a separate charge of attempted aggravated battery and three other felony charges stemming from an attack on a jail guard nine months after the shooting.

On Wednesday, Judge Scherer sentenced Mr Cruz to 26 years in prison for the jailhouse assault.

In a hearing on Friday, he acknowledged that his conviction in the jailhouse assault could become an “aggravating factor” in determining whether he will be executed.

Ahead of Mr Cruz’s guilty plea, Fred Guttenberg, whose daughter Jaime was killed in the shooting, told CBS News that he hoped that Mr Cruz would pay for his crimes “with his life”.

“My daughter should be living the best years of her life. My son heard his sister get shot and his life is forever impacted. My wife and I had two children that killer took this from us.”

Mr Cruz had been expelled from the school in 2017. Students and staff later described him as an “outcast” and troublemaker.

He had previously been investigated by local police and the Department of Children and Family Services after posting evidence of self-harm on the Snapchat app.

The Federal Bureau of Investigation (FBI) later admitted it did not properly follow up on a tip-off about Mr Cruz the month before the shooting.

Many of the shooting’s survivors went on to become prominent advocates for gun legislation reform and have demanded that action be taken to prevent similar incidents.

In an event marking the third anniversary of the shooting in February, US President Joe Biden called for Congress to pass gun law reforms, including a ban on assault weapons and an end to legal immunity for gun manufacturers.

“We owe it to all those we’ve lost and to all those left behind to grieve to make a change,” Mr Biden said. “The time to act is now.”