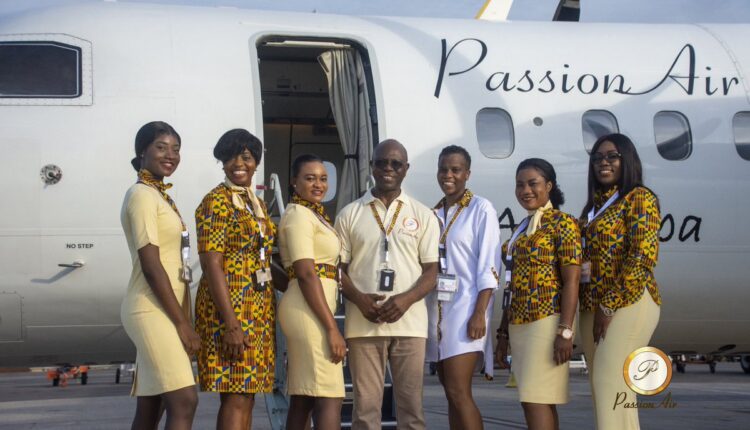 PassionAir has become the first commercial airline to put the Ho airport to commercial use, with the announcement of scheduled flights to the Volta Regional capital starting December 2021.

The announcement shared detailed two flights per week on weekends, and a GHC 209 starting fare for tickets.

The Airline has been operating in the country for the past three years and is adding on two new routes- Ho and
Wa.

Its online booking portal already incorporates the Ho destination and is expected to save the Ho Airport from
redundancy.

News of the flights has been received well particularly by indigenes of the Volta Region and is expected to draw
remarks from both economic and political observers.

The Ho Airport is yet to receive its first scheduled commercial flight since completed years ago, as airline operators took time assessing business viability in the Region.

Africa World Airline, another domestic service, provided the most assurance on the utilisation of the airport with widely publicised test flights but was yet to start operations.

The Volta Development Forum (VDF), lead regional advocacy organization, issued a statement ahead of the ongoing Volta Fair in Ho, calling on domestic airlines to consider the event as a threshold.

Mr Daniel Agboka Dzegede, Executive Director of the Forum, spoke to the GNA after the Passion Air move and conveyed the appreciation of the people of the region.

“The people of Volta are elated about the good news”, he said, calling for daily flights to be considered.

“A lot of people have promised to board the flights and the airlines should rest assured,” the Executive Director added and said the leadership of the VDF would join the maiden flight to whip up support and patronage, and would also entreat investors to help develop airport vicinity.

He also promised that the VDF would complement the efforts towards making the Ho Airport one of the best in the country.

“The VDF will consistently propagate the good news about the Ho Airport, and airlines must never entertain any fear. Theirs is to regularly provide the flights,” he assured.