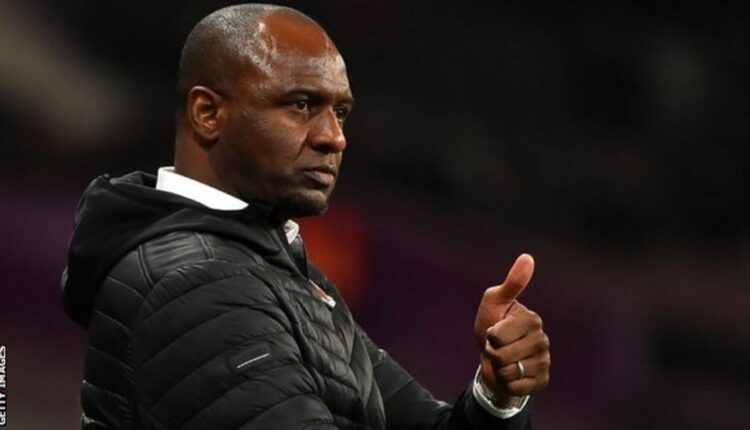 Crystal Palace have appointed Patrick Vieira as their new manager on a three-year contract.

Palace wanted a new boss in charge ahead of Monday’s return to pre-season training.

Talks in London throughout the week went well after an initial agreement was reached on Tuesday.

Palace’s initial preference was to appoint a manager with Premier League experience but with time ticking and a number of players contemplating their contractual situations, the club has relaxed its requirements to help speed up the appointment.

Proud and excited to be part of this new journey. I want to thank the @CPFC board for their trust & thank the fans for the amount of support I’ve been getting for the past few days. I can’t wait to see you there, back where it all started @premierleague. Come on you Eagles 🦅❤️💙 pic.twitter.com/fa8BO6LZgW

Sporting director Dougie Freedman will work closely with Vieira on all football matters, primarily transfers – an area that caused talks with Nuno Espirito Santo to break down three weeks ago.

“I am really excited to have this opportunity to return to the Premier League, and manage this great football club, as we begin a new chapter together,” said Vieira.

“It is a project that is really appealing to me, having spoken a lot with the Chairman and Sporting Director about their ambition and plans for the whole club including the Academy. The club has fantastic foundations in place after many years in the Premier League, and I hope we can make further improvements and continue to drive the club forward.

Vieira was not first choice but Palace’s quick decision to turn to him after Lucien Favre’s last-minute U-turn ensures contract talks with a number of players will involve the new boss.

One out-of-contract player Vieira cannot call upon is Patrick van Aanholt, who has decided to leave the club to seek a fresh challenge.

Palace insist the new manager will work closely with their academy and Vieira’s work with Manchester City’s development side has been recognised.

Palace’s academy was promoted to Category One nearly a year ago.

“I’m delighted and excited that Patrick has agreed to join Crystal Palace as our manager following successfully learning his trade at the City Group, and experiencing positive managerial spells at New York City and then Nice, who he led to the Europa League,” said Palace chairman Steve Parish.

“We have a lot to do to prepare in the coming weeks and I look forward to working closely with Patrick and Dougie in bringing in some new faces to help us all to a successful season.”

Vieira last managed Ligue 1 club Nice, first taking charge in the summer of 2018 before being sacked in December last year following a run of five defeats in all competitions.

The former Arsenal captain, who won three Premier Leagues and four FA Cups with the Gunners, previously coached at Manchester City before spending two and a half years in the United States in charge of MLS side New York City.

Vieira, a World Cup winner with France in 1998, was linked with Newcastle back in 2018, while in 2019 Arsene Wenger backed his former captain to become Arsenal manager in the future.