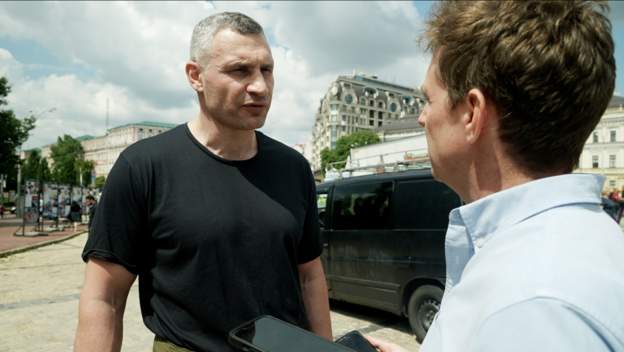 The Mayor of Kyiv, Vitali Klitschko, has told the BBC his country will only enter peace talks after the “last Russian soldier has left Ukraine”.

The former world heavyweight boxing champion was attending the funeral of a well known 24- year-old anti-corruption activist turned volunteer fighter, Roman Ratushnyi, who was killed in Izyum, in the Kharkiv region, earlier this month.

Some Ukrainian officials have expressed private concerns that Western allies may push their country towards a peace deal with Russia in light of the ongoing fallout from the war on food and energy supplies and the global economy.

When I asked Mayor Klitschko if he was concerned Ukraine could be pressured to making concessions to the Russians, he replied:

“I’m more than sure we will be ready to talk with the Russians about some compromise. If the last Russian soldier left Ukraine, it will be time to talk but not yet. Russians have to go from our homeland.”

Ukrainian commanders on the front line in Donbas in the east of the country say they are heavily outgunned by the Russians and losing hundreds of troops every day.

Klitschko, who won legions of global fans during his long record-breaking boxing career, told the BBC that the Russian people would eventually realise their own soldiers were dying for nothing more than President Vladimir Putin’s ambition.

He told me, “This is also a tragedy for Russians and for the Russian Federation. The people do not understand that right now, but I am sure they will realise very soon the reality. The Russians die – for what? The ambition of Putin? That’s why the unity around Ukraine and all democratic countries is key for peace and freedom in Europe.”

As one of the most recognisable Ukrainians in the world, Klitschko’s voice carries weight but the ultimate decision on if and when to enter peace talks will be down to President Volodymyr Zelensky and his government.