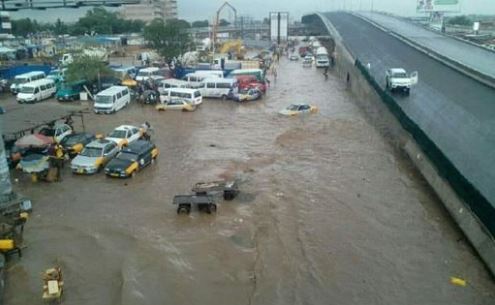 Accra has been flooded for the second time in four days.

The most recent incident occurred when the rain began at midnight on Tuesday, 24 May 2022.

The rain that lasted for almost eight hours caused traffic congestion on major roads in the capital.

As the deluge continued, Ghanaians flocked to social media to share videos of flooded areas, where the rains had caused massive havoc.

The previous incident on Saturday night saw a similar situation where many were left counting their losses after the downpour.

The Ghana Meteorological Agency (GMet) has already forecast three further bouts of heavy rain in the south by the end of June.

The phenomenon is likely to occur because the rainy season’s peak is nearing, according to Nana Kofi Opoku, the Principal Meteorologist at GMET’s Research and Applied Meteorological Department.

“When we look at climatology and the forecast that we released for the March, April, May, and June season, it looks like we have on average, three more such incidents to occur,” he said.

Other causes of floods are the improper planning of settlement in Accra, choked gutters that block the drainage system and a few other human factors.

Below are some comments on social media:

Waking up in Accra today… how’s your morning going? pic.twitter.com/KAmjKnkEXf

Those coming to towards kaneshie to Accra and circle….unless u find another rout 🌨🌨🌨⛈ pic.twitter.com/DE0JWHAtsi

When the rains come, Accra floods. Every year! But still no solution to it.