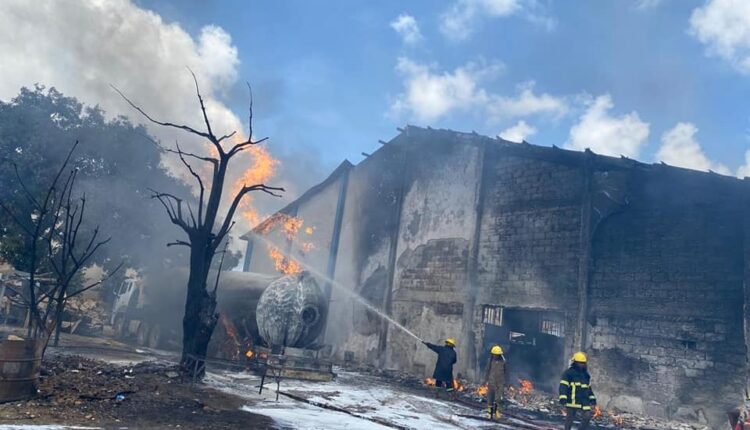 Parts of the Kumasi Shoe Factory in the Ashanti Region have been gutted by fire.

The cause of the fire is not immediately known, but the Ghana National Fire Service (GNFS) said in a post on Facebook that their personnel was on the ground making frantic efforts to douse the fire.

“Four (4) pumps are currently at the scene managing the situation,” the firefighters noted.

Meanwhile, pupils of Lobab International School and other users of the shoe factory, including residents in the neighborhood, have been evacuated to safety.

Though the cause of the fire has not been established, eyewitnesses have linked the inferno to a gas tanker in the area.

The gas tanker, according to them, was discharging fuel into a plastic company nearby’s cylinder when it caught fire.

The service added that the firefighters are being tactical to prevent a spread and explosion of the gas tank. It also confirmed that the injured have been sent to the hospital and are responding to treatment.

Established in 1960, the shoe factory, located on a 35.75-acre land produced footwear and rubber sheets under an agreement signed by Ghana’s first President, Dr. Kwame Nkrumah, and Czechoslovakia in 1961.
However, it collapsed in the late 1970s, and subsequent governments, including the current administration, have revamped it to produce leather products, including boots for the country’s security services.
Story By Aba Asamoah / info@theghanareport.com
AccrafactoryGhanaKumasiKumasi Shoe FactorynewspaperSHOE
You might also like
News