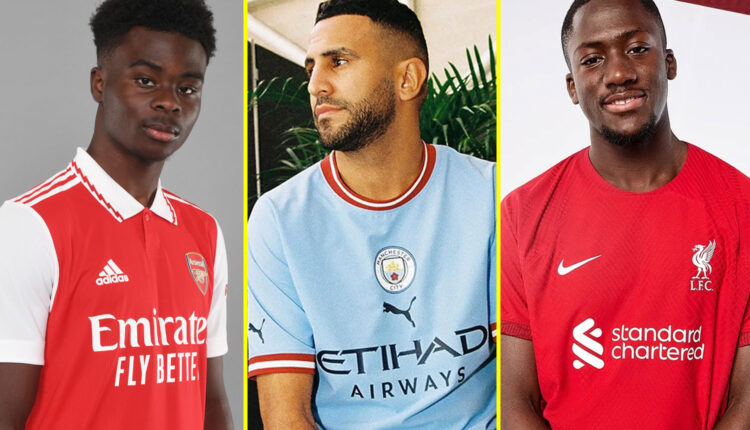 Another English Premier League (EPL) season is on the horizon, and that means the various clubs will be showcasing designs from their various kit sponsors.

Every year, teams release new jerseys giving them a unique identity for the football season.

The EPL has witnessed some stunning kits over the years and some not-so-great ones.

However, it is always an exciting time just before the season to see what your club will be wearing for the next calendar year.

With the EPL scheduled to start this weekend, we take a look at what the 20 Premier League clubs will wear in front of their home fans this season.

Description: The 2022-23 home jersey for Arsenal is, of course, red and white – in terms of design, the main feature of the kit is its collar, which is a polo-style one that is white with a red zig-zag graphic going around the rear.

The sleeves of the new design are white apart from a red panel on the lower part, matching the colour of the 3 Stripes.

Description: The Aston Villa 2022-23 home shirt has a traditional look that combines a claret base with light blue sleeves. Additionally, the jersey features a subtle V design pattern on the front and back.

A claret V-neck with light blue trim, a light blue lion on the upper back and white sponsor logos on the chest complete the clean look.

Description: Introducing a modern take on classic red and black stripes, the 22-23 home shirt of Bournemouth comes with 3 jagged black stripes on top of a red base on the front. The sleeves of the jersey are solid red with black cuffs.

A red V-neck, a white Umbro logo on the right chest, and the club crest in its regular form on the opposite side round off the bold look.

Description: Brentford’s home jersey for the upcoming season brings a classic design with four white and three red stripes on the front, back and sleeves, the latter being slightly wider.

One central yellow pinstripe adds to the electric appearance. The sleeve cuffs, crew-neck collar and Nike Swoosh on the right chest are also yellow. The lower back also features stripes.

Description: The new home kit for Chelsea FC is all blue with a white/turquoise henley neckline.

A turquoise lion pattern can be seen on the white neck. The same design is repeated on the Chelsea 22-23 pre-match top as well as other items from the collection.

Description: Introducing a modern take on stripes look, Palace’s new home jersey comes with 3 red and 2 blue brushstroke stripes on the front, with the sleeves continuing the look.

A white crew-neck collar and white sleeve cuffs, both with red and blue trim, add to the modern appearance. The sponsor logos on the chest and sleeves are white as well.

What is unique is the geometric pattern. It is inspired by Prince Rupert’s Tower, which is the centrepiece of Everton’s crest.

The tower is also featured in the back-of-neck sign-off.

Description: Fulham’s home kit is mainly white, featuring black logos and Adidas branding. The most interesting aspect is the red, wavy graphic that appears on the sleeve cuffs and collar, representing the Thames River.

Description: Introducing a clean design, the Adidas Leeds 22-23 football shirt is predominantly white with a very faint pattern made up of the classic LUFC logo – this is in honour of the 50th anniversary of the 1972 FA Cup win.

Blue and yellow trim is present in the form of the collar and sleeve cuffs, which exactly match the respective colours used on the club logo and sponsor. 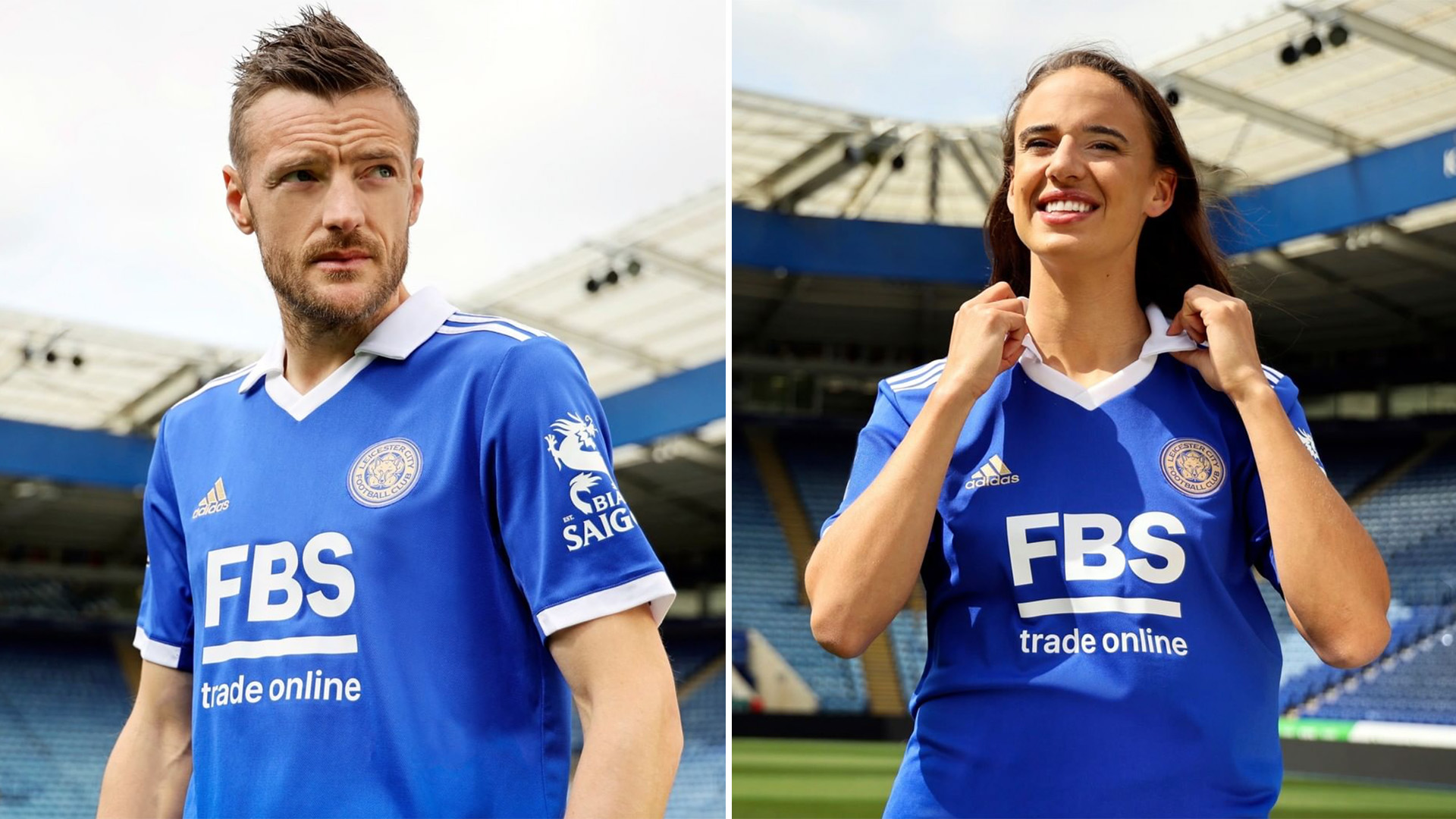 Description: Leicester City’s new season home jersey comes in the club’s usual shade of blue, featuring a solid base without a graphic. As we have seen with some other Adidas B-tier teams this year, a standard template with a white collar is used.

Adidas’ stripes on the shoulders appear in white, just like the sponsor logos. However, Leicester’s crest comes in a gold-blue colourway with the Adidas logo also in matching gold.

Description: Liverpool’s 2022-23 home shirt introduces a very clean and understated design in red without any graphics or trim, with just the logos being coloured in white/beige.

The main colour of the shirt is slightly darker than in the current season, which works well with the overall aesthetic.

Description:  Manchester City will line up in the upcoming season in a strip which echoes classic designs of the past, with their club crest positioned in the centre of a light-blue shirt and maroon trims on both the neck and sleeve cuffs.

The design is inspired by “club icon Colin Bell” and “the entertaining teams of the late 1960s”.

Description: Manchester United’s home kit combines a rather dark red main colour with a white Adidas logo and black Three Stripes and makes the kit special is the Polo collar. The white collar comes with a 1994-inspired triangular design.

The home kit features a shield on which the Manchester United logo is placed. The shield has a pentagon shape with a slightly darker tone of red than the rest of the shirt. It is also outlined by a thin border to separate the shape.

The last time Manchester United’s crest had a shield around it was in 2019, but this time the shape and colour are different. Nike did so in 2006-07.

Description:  Newcastle’s new shirt introduces a classy look with thinner black and white stripes than in the current season, which continues on the sleeves and seemingly also on the back.

The collar and cuffs of the home jersey are white with a black line through the centre, while the Castore logo is blue.

Not a huge fan of sky blue becoming a regular thing on Newcastle home kits, but this is as good as it’s going to look with it, and it’s still superb.

Description:  Introducing a simple look, Nottingham Forest’s home football shirt combines a red base with a subtle graphic on the sleeves inspired by Trent Bridge. Trent Bridge is a central landmark for the club and its supporters as it connects the sporting district with the rest of the city.

Dark red sleeve cuffs, a dark red crew-neck collar and white Macron logos on the right chest and sleeves complete the no-nonsense look. The club crest sits on the left chest in a fully white rendition, while the acronym “COYR” graces the upper back.

Description: Southampton’s home jersey contains a lot more white than what we’re used to seeing from the Saints. It draws inspiration from those worn by the club in the early ’80s, inverting the colours, resulting in a striking central red stripe and central badge on a white base.

The band is bordered by black lines which run into the black round neck collar.

A contemporary geometric pattern taken from the iconic stanchions of St Mary’s Park is found on the torso and back of the shirt, and the central badge placement stands this kit apart from previous seasons. The sleeves are complemented with two Hummel chevrons and the inside neckline also features the Hummel logo.

The collar and sleeve cuffs of the Nike Tottenham Hotspur 2022-23 home shirt are both navy with a Volt line through the centre.

The inner neck of the Nike Tottenham Hotspur 2022-23 home jersey is also volt and features an array of SPURS writings in navy, both filled and outlined.

Kit sponsor:  Umbro
Description: West Ham United’s new jersey for the 2022-2023 season is claret with raglan sleeves that feature a stripe graphic in white and blue, inspired by a somewhat similar look from the 1991-93 seasons.

All logos on the front of the Umbro West Ham United FC 2022-2023 home shirt are white, including a monochrome club badge, while a thick crew-neck collar – blue at the front and white at the back – completes the look.

Description: Wolves’ jersey for home fixtures features classic amber, black and white. It comes without any fancy design elements – it has a solid base, with sponsor AstroPay appearing in mainly black with a touch of red.