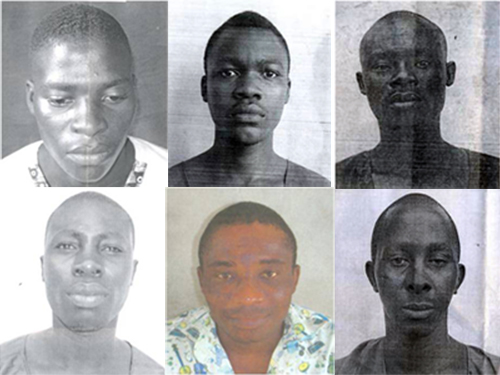 TheGhanaReport.com profiles a list of six prisoners, who escaped from custody while on labour duty outside some prisons in parts of the country.

They have been declared wanted by the Ghana Prisons Service.

The fugitives are convicted persons, serving various terms for stealing, conspiracy and robbery.

Among the lot, Gazali Bawa was the first to abscond from the Yeji Prison Camp, where he was serving 60 months in hard labour for stealing. Prison documents said he has an oblong head and face, sloppy shoulders, broad chest and speaks Gonja and Twi.”

Eric Ahiakpor, who was serving four years in prison for stealing absconded on May 17, 2011. Prison documents describe him as lanky with oval head and face, small cheeks and spoke Ewe and French. He escaped from the Ho Central Prison in the Volta Region.

When William Sackey went out with his prison guard on September 17, 2011, he abandoned his work and disappeared. He was serving two years in prison for stealing.

Sampson Yeboah and Kweku Poku reclaimed their freedom, albeit temporarily and are on the run from the Amanfrom Camp Prison in the Ashanti Region, where they were jailed 32 months and four years, respectively.

Yeboah, a convict serving four years in hard labour for stealing,  disappeared on November 5, 2011. He escaped from the Amanfrom Camp Prison in the Ashanti Region.

Kweku Poku also saw his chance and took it, leaving behind the shackles of restricted freedom.  He was serving 32 months in hard labour for stealing.

On April 4, 2012, Yaw Asamoah, who was serving 20 years in hard labour in the Nsawam Medium Security Prison, disappeared when he went out to work as part of his sentence.

Prison documents describe him as having a rounded face with multiple scars (accident), at his back. He is short, stout with a dark hair and speaks Ga and average English.

Some of the fugitives were prisoners transferred to local and camp prisons to serve the remaining terms of their sentences, but they took advantage of the relaxed regulations and environment and escaped.

The prisoners in the local and the open camp prisons have the easiest way to escape. While local prisons concentrate on safe custody and the welfare of inmates due to lack of space for trade training activities, open camp prisons, on the other hand, undertake agricultural activities to provide food and train inmates in modern agricultural practices.

Prisoners who are about to be discharged are transferred to such facilities as transit points to prepare them for their final release.

In other jurisdictions escaping from prison involves sophisticated plans. In Ghana, prisoners often flee on the spur of the moment when a window of opportunity opens, especially when they are working outside the walls of the prison.

According to the Ghana Prison Service data, external labour is one way most prisoners disappear.

Head of Public Relations of the Ghana Prisons Service, Supt Courage Atsem, said to go on external labour, a prisoner’s sentence must be either less or he or she might have served the sentence to some point and was exiting.

Ghana’s prison regulations do not permit prisons officers to carry offensive weapons such as guns while escorting prisoners, a situation which sometimes emboldens prisoners to escape or even threaten the lives of prison officers.

Per Ghana Prison Service regulations, officers carrying guns do not follow prisoners. This is because the concept of imprisoning is reformation and wielding a gun behind someone in reformation takes a psychological toll on the prisoner.

Out on the field, a congenial atmosphere is needed for cooperation between the prisoner and the prisons officer.

Supt Atsem said if a prisoner escaped, there were various forms of punishment meted out to the prison officer after investigations and a hearing, irrespective of the circumstances under which the prisoner escaped.

The sanctions include outright dismissal, reduced rank and reduction in salary or caution.