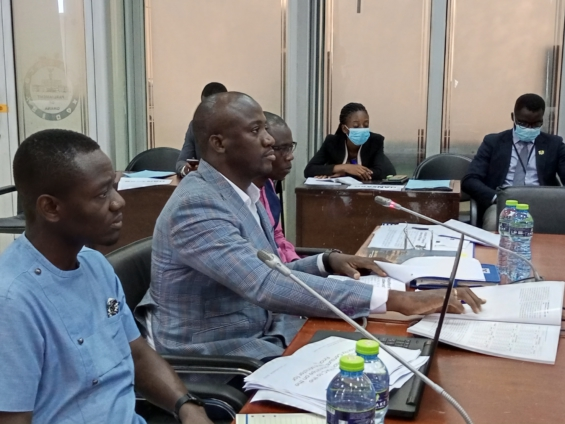 Officials of the Public Interest and Accountability Committee (PIAC) have reaffirmed information in their 2021 report to the effect that $100 million of petroleum lifting revenue was not paid into the Petroleum Holding Fund.

Mr. Nasir Alfa Mohammed, the Vice Chairman of PIAC, said this when he appeared before the Parliamentary Ad-hoc Committee hearing the censure motion for the removal of Mr. Ken Ofori-Atta, on Thursday.

Mr. Mohammed reiterated that in line with the Petroleum Revenue Act, all petroleum revenues must be paid into the Petroleum Holding Fund, but the aforementioned amount was not deposited.

The Vice Chairman was at the Committee’s sitting to provide evidence in relation to issues raised in the Minority Caucus’ motion.

In the censure motion, the Minority among others, alleged illegal payment of oil revenues into offshore accounts in violation of Article 176 of the 1992 Constitution.

Quoting from the 2021 PIAC Report, Mr. Mohammed said in line with the Ghana National Petroleum Corporation’s (GNPC) strategy to increase its stake in viable oil blocks, the Corporation acquired a seven per cent interest from Occidental Petroleum (Anadarco WCTP Company) in respect to the Company’s DWT/WCTP assets for $199 million effective 1st April, 2021.

“This acquisition is to be transferred to GNPC Explorco, and translates to 5.95 per cent and 6.04 per cent production interest in the Jubilee and TEIN Fields respectively for GNPC.”

He said following that acquisition, which was later ceded to GNPC’s subsidiary (100 per cent subsidiary) – the Jubilee Oil Holdings Limited (JOHL), made its first lifting of 944,164 barrels of oil on the Jubilee Field in the first half of 2022.

“Mr. Chairman, an amount of $100,748,907.95 million, which was realized from the lifting was not paid into the Petroleum Holding Fund as required by law,” he said.

Citing Section 6 of the Petroleum Revenue Management Act, 2011 (Act 815), Mr. Mohammed said “The following shall constitute the gross receipts revenues for the Petroleum Holding Fund – royalties from oil and gas, additional oil entitlements, surface rentals, other receipts from any petroleum operations, and from the sale or export of petroleum.”

“Any amount received from other direct or indirect participation of the Government in petroleum operation. Corporate income taxes in cash from upstream or midstream petroleum companies…..”

He said Section 7 of the Petroleum Revenue Management Act, as amended, states that revenue due from direct or indirect participation of the Republic in petroleum operations, including the carried and participating interest shall be paid into the Petroleum Holding Fund.

Mr. Mohammed said it was the consideration of PIAC that contrary to Section 6 (e) of the Petroleum Management Act, 2011, (Act 815), capital gains tax was not assessed and collected by the Ghana Revenue Authority (GRA) in the sale of the seven per cent interest by Anadarco in the Jubilee and TEIN Fields in 2021.

“Mr. Chairman, the Committee did not rest on this issue. We wrote to both the GRA and the Ministry for Finance for responses on this issue.”

The Vice Chairman of PIAC said the GRA in their reply redirected them to the Ministry of Finance, indicating that the Ministry is exclusively in-charge of the transaction.

“And the Ministry of Finance in turn referred the Committee to the Ghana Revenue Authority for answers,” he stated.

Mr. Mohammed noted that following this development, PIAC called all the stakeholders to a validation meeting and “because the written responses were there, no one could deny.”