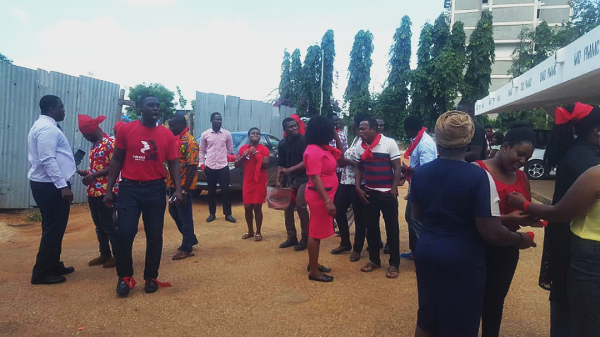 PMMC staff call off strike after meeting with MD, Board members

Workers at the headquarters of the Precious Minerals Marketing Company (PMMC), have called off their sit-down strike.

The aggrieved workers, numbering about fifty, had called for the removal of the Managing Director of the company, Kwadjo Opare Hammond and his entire board for a number of infractions.

But after a five-hour meeting between the workers, management and the Ghana Mine Workers Union on Friday, the staff agreed to call off the strike.

According to the workers, the MD, with support from the board, had breached the procurement processes of the company and was using divide-and-rule tactics in the company, while spending money on unnecessary things.

Those allegations were denied completely by the management of the company.

The second day of the sit-down strike by the aggrieved workers saw little to no activity on the premises of the company.

A few red bands could be seen on some parts of the compound, and some workers were also spotted wearing bands, while many others went without it.

The story was however different on Friday [October 5, 2018] as the aggrieved workers with support from the Ghana Mine Workers’ Union, engaged the Managing Director and members of the PMMC Board to find solutions to their grievances.

Kwadjo Opare Hammond, the accused MD of PMMC, attributed the demonstration to a communication gap between management and the workers.

“Both parties are leaving this meeting very happy. We have together released a communique that is telling the whole world that most of the concerns raised by the workers had already been clarified at the board level, the ones that are yet to be clarified will be looked at in due course. We all admit that these demonstrations came about because there were communication gaps so we are taking steps to ensure that those gaps are taken care of.”

“So with immediate effect, calm has been restored and we will go about our duties effectively from Monday devoid of any acrimony. There is some apprehension that some workers were going to be sacked. I want to assure everyone that nothing of that sort will happen.”

The General Secretary of the Ghana Mine Workers Union, Prince William Ankrah, added that they would keep an eye on developments at the company to ensure that their members are treated fairly.

“We won’t back off. We will still be part of the process to make sure that things are going well. We are hopeful that management working in collaboration with the workers will create a conducive environment.”

The branch secretary of the local workers Union, Agnes Aryeetey, who led the demonstration on the first day said they would return to work and trust their mother union to ensure that the right things are done.

“We trust that our authorities will do a good job. We know what we are talking about. We hope our leaders will investigate to come out with the true state of things at PMMC. For now, because we have signed the communique we would go back to work until everything is sorted out. But it doesn’t mean that we’ve thrown in the towel.”

Precious Minerals Marketing Company (PMMC) Ltd was established in 1963 as Ghana Diamond Marketing Board charged with the sole responsibility for the purchase and marketing of Ghana’s diamonds. In 1965, by Legislative Instrument (LI) 401, the Company was incorporated as a State Owned Enterprise (SOE). With the promulgation of the diamonds decree (NRCD 32) in 1972, LI 916 was enacted to change the company’s name to Diamond Marketing Corporation.