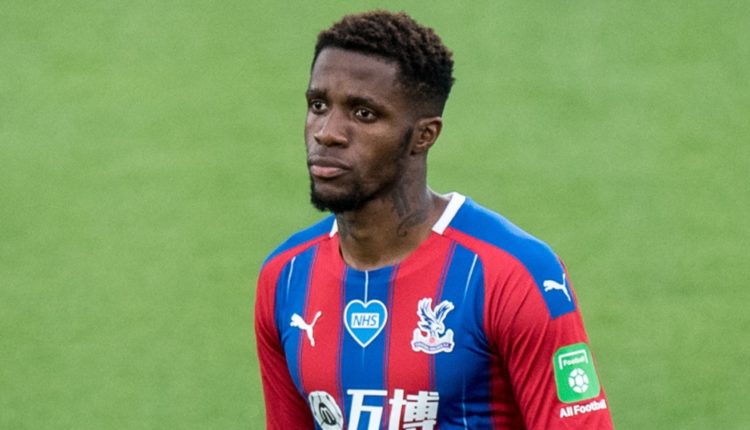 “You better not score tomorrow you black c***,” one read.

That was followed by a second message reading: “Or I’ll come to your house dressed as a ghost.”

Zaha was then sent racist imagery, with the Ivory Coast international deciding to share the abuse, collating the messages and tweeting: “Woke up to this today.”

West Midlands Police said in a statement on Twitter on Sunday afternoon: “We were alerted to a series of racist messages sent to a footballer today and after looking into them and conducting checks, we have arrested a boy.

#ARRESTED| We were alerted to a series of racist messages sent to a footballer today and after looking into them and conducting checks, we have arrested a boy.

The 12-year-old from #Solihull has been taken to custody.

Thanks to everyone who raised it. Racism won't be tolerated. pic.twitter.com/oFxBUvdtV1

“The 12-year-old from #Solihull has been taken to custody.

“Thanks to everyone who raised it. Racism won’t be tolerated.”

Palace manager Roy Hodgson, speaking after his side’s 2-0 loss at Villa Park but before news broke of the arrest, said: “He (Zaha) is very unhappy and he’s entitled to be.

“These cowardly, despicable acts from people… presumably trying to get some sort of advantage for the team they support, maybe trying to put some doubts into the head of one of the opposition team’s star players.

“It’s very sad that people resort to the type of abuse that he resorted to.

“This unknown person will no doubt remain unknown because it’s too simple I think for people to hide behind these websites and make these despicable, vile comments.

“And yet we expect the player who is being hurt by these comments just to shrug his shoulders and take it as part and parcel of the game.

“It’s nothing to do with the game and I only hope the authorities catch the person who did this and they will be punished accordingly and for me, the punishment could not be severe enough.”

Speaking earlier, in a pre-match interview with Sky Sports, Hodgson said: “I think it is right that Wilf made people aware of it; I don’t think it is something he should keep quiet about.

“I think it is very good that our club, Aston Villa and the Premier League are doing everything they can to find out who this despicable individual is and one can only hope that they will get identified and they will get called to account and they will pay for these actions.

“There is literally no excuse; there is no excuse at all.”

The Premier League also issued a statement condemning the abuse.

It read: “This behaviour is completely unacceptable and the Premier League stands alongside @wilfriedzaha in opposing this, and discrimination in any form. There is #NoRoomForRacism, anywhere.

“We will continue to support players, managers, coaches and their family members who receive serious discriminatory online abuse.

“Through our dedicated reporting system we can take immediate action on cases like this.”

Anti-discrimination campaigners Kick It Out tweeted: “We are extremely disappointed that Wilf Zaha has once again been the subject of targeted racial abuse.

“Those who continue to select professional sports people in this way, need to be brought to justice and face the strongest consequences #KickItOut”

“This racist abuse is a hate crime and needs to be investigated by the police. A criminal record and five-year ban from football awaits the culprit.”

Former England defender Sol Campbell saluted the mechanisms in place for people to be tracked down when they post online abuse.

Campbell told Sky Sports: “Sometimes these incidences happen and it’s tough because do you want to speak out? Do you want to rock the boat? These things are hurting people.

“Zaha doesn’t want to wake up to these images on his Instagram but it’s good that authorities are there and mechanisms in place that you can track people down.

“If you give all the information away, to the right authorities they can track you down very easily. You know, a 12-year-old boy, it’s quite shocking really.”

“The conversation is out there, everybody is talking about it and that’s key really,” added Campbell.

“The main thing now is that people are listening now.

“And there are mechanisms, ways of finding and tracking people down now who are the perpetrators of these images or abuse online – keyboard warriors.

“The main thing now is there is a mechanism to track people down.”