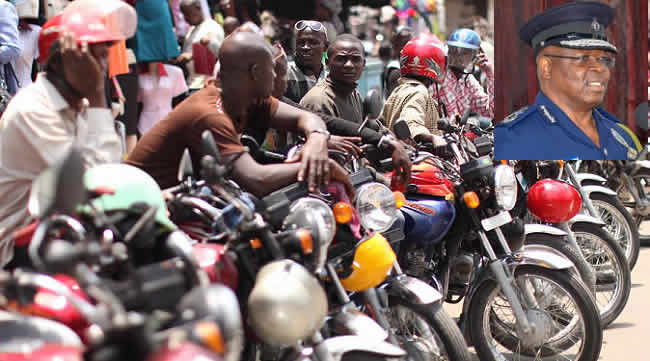 The police has banned the use of motorbikes at polling centres during the December 7, 2020, general elections.

According to the Inspector-General of Police, James Oppong Boanuh, no motorbike whether registered or unregistered would be allowed at the voting centre.

He warned that persons with motorbikes must stay at least 100 meters away from the centers.

“If you try to bring it there, we will prevent you from doing so,” he said while addressing the media on the preparedness of the National Election Security Taskforce ahead December polls.

Mr. Oppong Boanuh explained that the decision was to prevent instances where motor riders snatch ballot boxes at polling centers.

Motorbikes have over the years gained notoriety in Ghana.

Some persons use them for robberies of all kinds, and in politics, they have featured in some incidents of political violence.

In July 2020 at the Steps to Christ registration centre in the Awutu Senya East constituency, there was chaos that involved motorbikes.

Member of Parliament for the area, Mavis Hawa Koomson was alleged to have fired gunshots ostensibly to scare a group of motor riders who were earlier seen with her NDC opponent.

The incident led to the burning of about four motorbikes at the registration centre.