The Western Regional Police Command has formally briefed families of the three missing Takoradi girls on latest findings with regards to the investigations into their  whereabouts.

Last Saturday, the Regional Command, led by Deputy Commissioner of Police (DCOP) Redeemer Vincent Dedjoe, on behalf of the Inspector General of Police (IGP) and the Police Administration visited and engaged the families, a day after the operation undertaken by a special investigative team from Accra.

“I must say that what we have seen what is within the residence of the convict and suspect, Samuel Udoetuk-Wills, and these are human remains, mainly bones and skulls in a cesspit and we have taken custody of them to help our investigations,” he said.

Although the police did not confirm that the bodies they had retrieved through an operation at Kansawrodo last Friday were those of the missing girls, they said it was important to keep the families posted on the latest updates and reassure them that every effort was being put in to find the missing girls.

DCOP Dedjoe, apologised for the manner the news got to the public domain before the Police could formally brief the families. 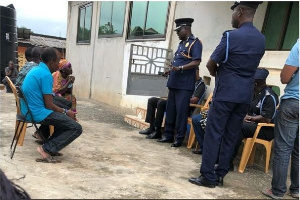 He explained the operation was completed quite late in the night and hierarchy had to be briefed first and that is what caused the delay.

The Police Commander added there is the need to process the exhibits in order to ascertain whether or not they are those of the missing children.

They families have expressed their readiness to assist the police in their investigations in order to bring closure to the issue in the coming days.