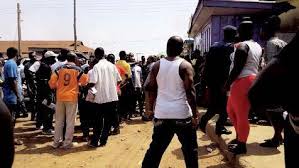 The Ashanti Region Police have opened investigations into chaos at a registration that temporarily halted the registration process.

A viral video shows a police officer and a plain officer man arguing at a registration centre moments before the plain cloth man pulled a gun.

The Deputy Ashanti Regional Public Relations Officer, Godwin Ahianyo, in an interview with thegahanreport.com said the video had been seen and investigations have been launched.

The registration exercise at Aboabo number 1  in the Asawase Constituency in Kumasi was on Monday put on hold after a tussle ensued between a police officer and, a man who claims to be,  national security operative.

The national security operative, Yashua Yakubu, according to JoyNews, demanded that the police officer, the bodyguard of the Member of Parliament for the constituency,  Mohammed Mubarak Muntaka, vacates the center.

Yashua Yakubu popularly known as Boyo pulled out a gun after the officer refused to leave.

He insisted he had received ‘order from above’ to drive the officer out.

According to JoyNews, a military reinforcement was called to calm situations.

JoyNews’ Erastus Asare Donkor said, the member of parliament had been visiting the various registration centres in the constituency but instructed his bodyguard to man the Aboabo No. ‘1’ centre.

This was because he realised, that a particular centre had only fire service personnel.

According to the Majority Whip, he asked the Regional Police Commander why only one fire service personnel was detailed to the registration centre and the response was that the police were understaffed.

Expressing his displeasure, Muntaka said he and his team had experienced similar violent acts in the ongoing registration exercise in the constituency, yet the police had paid little attention.

“Since this happened, all the evidence we gathered and gave to the police, not a single action has been taken”.

“Yet, sometimes we will just hear accusations about our agents or any other person which will cause them to be deliberately arrested without any grounds or sometimes knowledge of why they are arresting them”

“…this shall also pass, but people should know crime has no expiry date,”  he added.

But the  Deputy Ashanti Regional Public Relations Officer, Godwin Ahianyo in an interview with thegahanreport.com declined to comment on the claims the MPs made.

Apart from Asawase, there has been violence in registration centers at Banda in the Bono Region; Kotobabi, and Accra New Town in the Greater Accra Region, Hohoe in the Volta Region and Steps to Christ registration center in Kasoa, Central Region which involved the Minister for Special Initiative and Development, Hawa Koomson