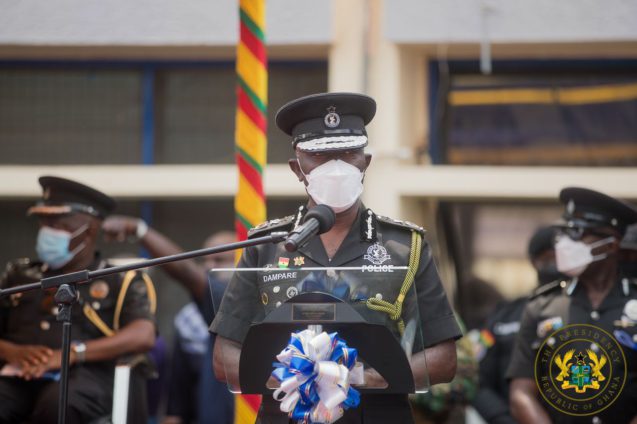 A Police Officer, who allegedly impersonated the Inspector General of Police, Dr George Akuffo Dampare and Director-General of CID, COP Ken Yeboah, has been granted bail by an Accra Circuit Court.

General Corporal Akonor Opoku was charged on two counts of attempt to commit crime and defrauding by false pretense.

He pleaded not guilty to all the charges.

The Court, presided over by Mrs Adelaide Abui Keddey, admitted the accused person to bail in the sum of GHS100,000.00 with two sureties.

The bail was granted when the Court found out that the accused person was not a fright risk and had a fixed place of abode as prayed by his Counsel, Mr Kofi Agyena Agyemang.

The court ordered the prosecution to file and serve all disclosures and witness statements within 21 days.

The case has been adjourned to August 31, 2022, for Case Management Conference between the parties.

Police Chief Inspector Richard Amoah, prosecuting, told the court that the complainant was a Lebanese and a resident of Tema Community 11, whilst the accused person was a Police Officer stationed at the National Patrols Department of the Ghana Police Headquarters-Accra.

The prosecution said on October 11, 2021, the complainant petitioned the Director General of CID to investigate and arrest one Nalia for stealing USD40,000.00 from his room on August 18, 2021.

On August 19, 2021, the complainant received text messages and phone calls on his Vodafone and MTN contact numbers from an unknown Airtel Tigo number posing as the IGP and the Director-General of CID.

Chief Inspector Amoah told the court that the callers told the complainant that they knew where the suspect Nalia was hiding and that he should pay GHS10,000.00 for her arrest.

The prosecution said the complainant pleaded and sent GHS150.00 to the accused person through MoMo and promised to pay the remaining amount upon the arrest of the suspect.

Chief Inspector Amoah said the callers kept on calling the complainant and sending him text messages to demand the balance.

The prosecution said the complainant, upon realising that the callers, with whom he used to communicate were neither IGP nor Director-General of CID, reported the incident to the police.

Investigations revealed that a Bontel phone with two SIM slots with their relative IMEs used by two Airtel Tigo numbers to contact the complainant as the IGP and Director-General of CID was found to have been used 198 times between the period of August 23, 2021 and September 27, 2021, by the accused person with his personal phone number.

Further investigations revealed that the accused person registered the Airtel Tigo numbers from mobile money vendors, who were witnesses in the case, under the pretext of registering them for his superiors at the Police Headquarters-Accra.