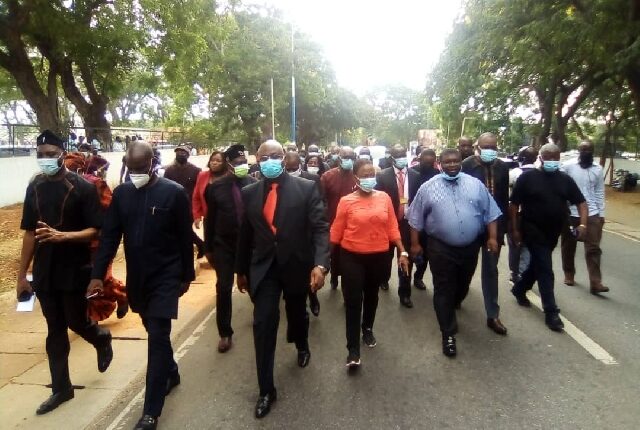 Police have stopped opposition NDC MPs from a march to the Electoral Commission to present a petition over disputed 2020 general election results.

A police team led by Kwesi Ofori stopped the MPs after they removed a barricade in front of the Electoral Commission headquarters.

The MPs had marched from Parliament, about 1.9km from the EC headquarters demanding among other things, a re-collation of the Techiman South parliamentary results which was declared in favour of the NPP candidate, Martin Adjei Mensah.

But the MPs were met at the borders of the EC head office with a team of riot control police officers.

The Accra regional police said the MPs did not notify the police. The Minority leader, Haruna Iddrisu, said the caucus had notified the EC of the march to present a petition.

“It is a peaceful walk to present a petition. I wrote to them.  They have acknowledged receipt” Haruna Iddrisu, surrounded by the police, told reporters.

Why Techiman South result is in dispute?

Techiman South constituency witnessed violence during the voting day as security forces shot to disperse a crowd. The violence led to one death.

During the violence, party agents and journalists fled the scene. A video shows the EC later declared the results in favour of the NPP candidate.

But while the EC has released the pink sheet for the presidential results, that of the parliamentary remains undisclosed.

That result is key in the NDC’s push for a parliamentary majority after the 2020 general election results showed a hung parliament.

The NDC sees a re-collation as an opportunity to win a slight majority in parliament.

And so led by the Minority leader Haruna Iddrisu, dozens of NDC MPs gathered in front of the EC headquarters to demand a re-collation of the results.

While the NDC is under pressure to use the courts, the Minority leader Haruna Iddrisu said it found this position ‘strange’.

“Go to court with what?”, he said, explaining that it needs a copy of the results to challenge the declaration.

The NDC had gone to Techiman South EC office to obtain a copy of the pink sheet but it was directed to go to the regional office of the Electoral Commission.

Minority leader, Haruna Iddrisu, said it is not good for democracy that an election should happen and yet no official document has been made public to show the votes garnered by the candidates.