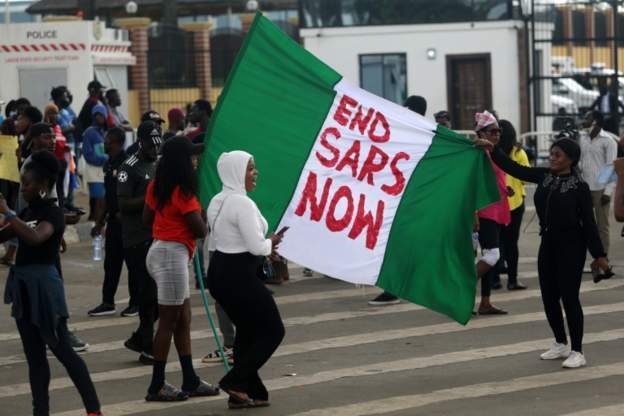 There are reports of heavy police presence in parts of Lagos state after authorities warned against resumption of #EndSARS protests across Nigeria.

Police in Lagos had issued a statement on Sunday against planned demonstrations on Monday, warning that protesters would be resisted.

“Some unpatriotic individuals and groups are planning to embark on the replica of the recent destructive and violent #EndSARS protest that left pains and agonies in the state,” spokesman Olumuyiwa Adejobi said in the statement.

“Lagos State is still nurturing the wounds orchestrated by some violent #EndSARS protesters and not fit to accommodate such protest for now.”

The #EndSARS protests shook Nigeria for two weeks in October as the country’s youths campaigned against a now disbanded police unit known as Sars. The nationwide demonstrations that morphed into calls for an end to bad governance were halted after the army was brought in to disperse protesters in the Lekki area of Lagos on 20 October.

Amnesty International and eyewitnesses say more than 10 people were killed at the location, an allegation that has been denied by Nigerian authorities.

Judicial panels in many states are investigating the activities of Sars – a demand of the #EndSARS campaign, but there have been calls for demonstrations to resume after the government targeted protesters.

Since the protests were halted some of the protest organisers have been arrested and released while others still have their bank accounts frozen.

US rejects Russian demand to bar Ukraine from Nato