The pre-printed 2021 brochure for the inauguration of President Akufo-Addo, did not appear to envisage a change in the leadership of parliament.

The brochure still showed Prof. Aaron Mike Oquaye as the speaker of parliament a position he lost barely seven hours ago.

The publication of the brochure revealed the sheer unexpectedness of Prof. Oquaye defeat.

He was presented by the governing NPP as their candidate for speakership. But in a parliament sharply divided between NPP and NDC two unknown NPP MPs broke away from the party whip and backed the party’s political rival the NDC.

The NDC’s choice, former MP for Nadowli/Kaleo, Alban Bagbin pulled 138 votes but before the remaining votes could be counted, Member of Parliament for Tema West, Carlos Kingsley Ahenkorah, snatched the ballot papers and took to his heels.

It took the vigilance of some NDC MPs and security in the Chamber to accost him and collect the ballots in his possession.

It was a scene witnessed at some polling stations.

After the long-held meeting, Mr. Bagbin was declared the winner and sworn in by the Chief Justice Kwasi Anin Yeboah. 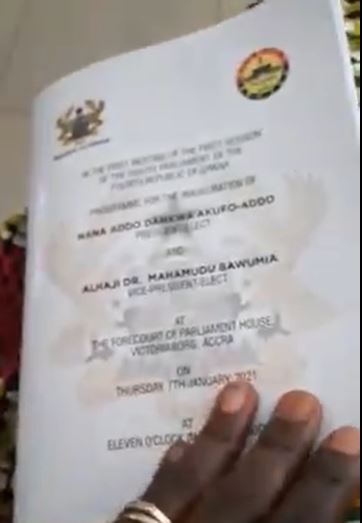 Reacting to his election as speaker of the 8th parliament, Mr. Bagbin said “I must say I am so happy and grateful to all of you even those who voted against me”

“I want to promise wholeheartedly to put at the disposal of parliament and the country a stall of knowledge, immerse experience and the huge data bank I have accommodated and accumulated over the 28years that I have been a member of this house” he added.