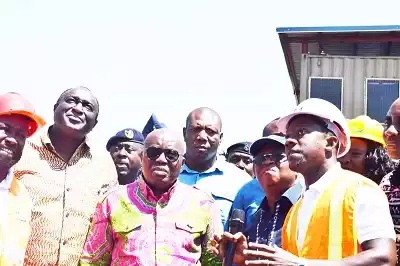 President Nana Addo Dankwa Akufo-Addo on Monday inspected a multi-grain processing facility at Adaklu-Tsrefe, in the Adaklu District of the Volta Region.

The inspection was the President’s first point of call in his two-day working visit to the region.

Mr Alan Kyeremanten, Minister for Trade who accompanied the President said the facility was a testimony of the President’s belief in Ghanaian professionals and in line with government’s “Ghana beyond aid” agenda.

“This is a perfect example of 1D1F and a testimony that Ghanaians can do it and we must celebrate HGL,” he said.

Dr. Sagre Bambangi, Deputy Minister for Agriculture described the facility as “phenomenal” and “touching on the very nerves of the President’s Ghana beyond aid agenda.”

He said Ghana’s consumption of rice was increasing and called for collaboration between HGL and his ministry and government to meet the growing demand.

Mr Senyo Hosi, Chief Executive Officer, HGL said the “Volta Trigger 1” project, which has rice mills and silos, all about 90 per cent complete has “massive potential” to meet demands in the country and export.

He said the project comprised three sub businesses- cultivation, cereal processing and agritourism, with the four metric tonne per hour rice mill capable of processing about 20,000 metric tonnes of paddy rice per year in a two shift cycle.

Mr Hosi said the company also had a 500-acre farm that served as a demonstration farm to support the agro processing and agritourism sub businesses.

He said the agritourism business was primarily to draw more Ghanaians, especially the middle class, into farming,”as a cool, fun and viable investment option using a crowd farming model.”

Mr Hosi said under that initiative, the company would develop an agric estate and encourage people to invest in identifiable farm lots per season just as they would invest in treasury bills, but with the harvests as return.

He said the company had 300 out growers, 1,500 farm hands on out grower farms, 10 input workers, 15 factory hands, 100 farm hands, 15 administrative and management officials and 10 sales officers for its “Gogo” rice from the demonstration farm.

Mr Hosi said the dream was to have similar projects in all districts across the country and make impact on society and the Ghanaian economy.

He appealed to government for a “push” to access EXIM Bank facility to achieve the dream.

HGL, which was started in 2017, is an indigenous Ghanaian social business driven by social impact drawing more citizens into the production function of the country by stimulating employment for less skilled persons in a sustainable manner.