President Akufo Addo has reassigned the Minister of State at the Ministry of National Security, Bryan Acheampong.

He will now be the Minister of State at the Interior Ministry. 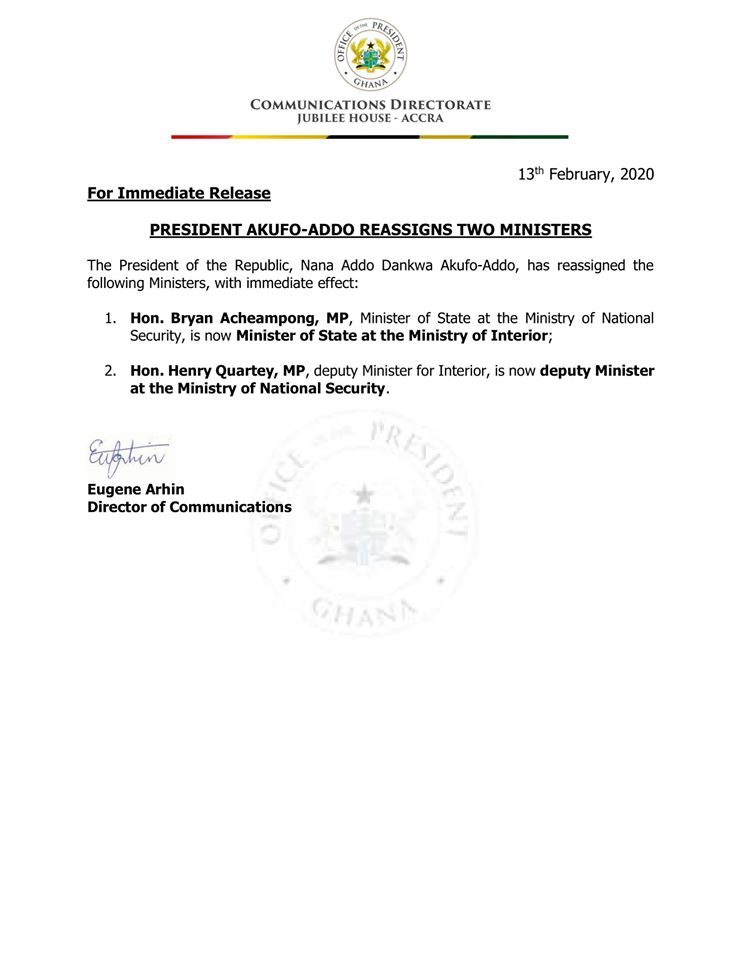 Mr Quartey, who doubles as the Ayawaso Central MP, was until the reshuffle, a Deputy Minister to Mr Ambrose Dery.

Bryan Acheampong, who is also Member of Parliament for Abetifi constituency in the Eastern Region, is not without controversy.

There had been numerous calls for Mr Acheampong to step aside after violence marred the January 31, 2019, Ayawaso West Wuogon by-election.

Masked men in khaki trousers and a black T-shirt with National Security Council (NSC) written boldly on them, signifying they were men deployed from the council, stormed a polling station at La-Bawaleshie on that day.

At least 16 people were confirmed to have sustained various degrees of injuries after the masked men stormed the private residence of the then NDC candidate, Delali Kwesi Brempong.

A commission of inquiry was set up in February to look into the circumstances leading to the violence, that also got the opposition National Democratic Member of Parliament for Ningo Prampram, Sam George, assaulted by a national security operative.

A month after grilling witnesses and the principal characters, who deployed the SWAT team, the Justice Emile Short Commission made some far-reaching recommendations.

Among the recommendations was for the evaluation and reorganisation of the National Security Ministry. It stressed the need for clarity on the responsibilities, roles as well as reporting lines for persons appointed to serve in the Ministry.

“The Commission recommends that the President (Nana Addo Dankwa Akufo-Addo) should review and restructure the Ministry of National Security to ensure clarity of responsibilities and roles as well as lines of reporting.”

It, therefore,  recommended to the President to clarify the exact role of the Minister of State in charge of National Security at the Presidency.

It did not end there. Starr FM reported that the commission also recommended that Mr Acheampong must be sanctioned for unleashing masked security operatives to police an election.

“The Commission recommends that Mr Bryan Acheampong be reprimanded for his ultimate responsibility as Minister in authorising an operation of that character, and on a day of an election in a built-up area,” the report presented to President Akufo-Addo said.

However,  the government in its whitepaper on the commission’s report rejected the recommendation to sanction Mr  Acheampong.

There have been claims of a rift between Mr Acheampong and Mr Dapaah.  It intensified after a leaked video of Mr Dapaah dancing to the whims and caprices of a young lady in a video call.

The Kan-Dapaah diary of controversies

Mortuary workers to strike on October 1

Secessionist Activities: Citizens must back security agencies to succeed –…

Arise Volta Region: Do not be misled by enemies pretending to be friends!