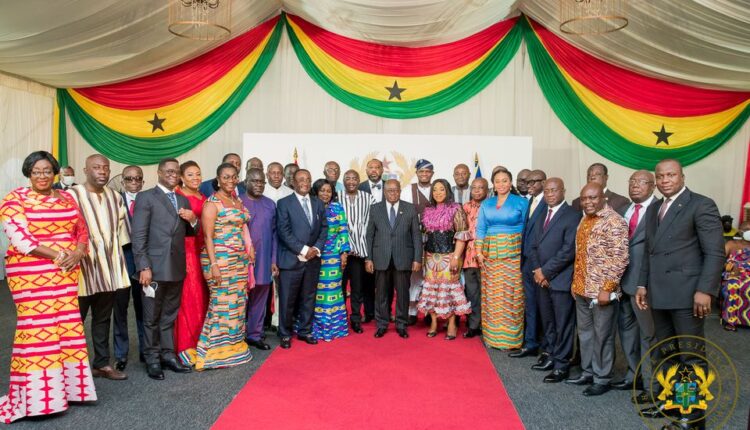 President Nana Addo Dankwa Akufo-Addo has sworn in the first batch of 28 ministers of his second term, with a charge on them to provide leadership that will spur the progress of the nation and help raise the living standards of the people.

After administering the Oaths of Allegiance, Office and Secrecy to the 28 ministers, the President urged them to deliver on their mandate because “that is why we are here and that is why the Ghanaian people voted for us”.

The ceremony was done under a neatly erected and airy canopy outside the banquet hall at the Jubilee House, which allowed for fresh air.

It was dotted with standing hand sanitiser dispensers at various corners coupled with strict adherence to COVID-19 protocols. Each minister was allowed to bring along three guests.

After the gathering had been called to order after the entry of the President, the Director of State Protocol, Ambassador Samuel Kumah, mentioned the names of each of the 28 ministers.

The President swore them in and presented to each of them an Instrument of Office, scrolled and draped in the national red, gold and greed colours.

Each of them signed the oath book, which was sealed off with the signature of the President at the bottom.

The Minister designate for Chieftaincy and Religious Affairs, Mr Ebenezer Kojo Kum, who has been vetted and approved by parliament, was not present because he was indisposed.

Addressing the gathering, President Akufo-Addo recounted the successes of the government of his first term, which he said, did well to the satisfaction of the Ghanaian people who also gave the government four more years to do more.

Recounting the progress achieved he mentioned the fact that the government was able to translate promises into concrete programmes, adding that prior to the COVID-19 pandemic, the country, for three consecutive years, was among the fastest growing economies in the world.

He said the country became the largest nation for foreign direct investment in West Africa, net exporter of food, started adding value to its raw materials and strengthened accountability to fight corruption.

President Akufo-Addo said he was assured that the backgrounds and experiences of the appointees would bring value to the governance of the country and be able to deliver on the commitment of the New Patriotic Party (NPP) manifesto.

He said it was important that they strived to provide good governance for the people and should remember at all times the changed nature of the political environment in which they were operating.

“The vote of December 7 has resulted in the virtual representation of the two major parties in Parliament, which means we are obliged to seek broad consensus in the manner in which we will implement our decisions,” he added.

Parliament
He commended Parliament for the expeditious and thorough manner in which it scrutinised the nominees and said what they had done was a concrete manifestation of the positive cooperation between the executive and the legislature.

Appreciation
The Minister of Communication and Digitisation, Mrs Ursula Owusu Ekuful, who spoke on behalf of the ministers, expressed appreciation for the confidence reposed in them and pledged not to let him down, saying “we will live up to the oaths we just swore and discharge our responsibilities to the best of our abilities”.