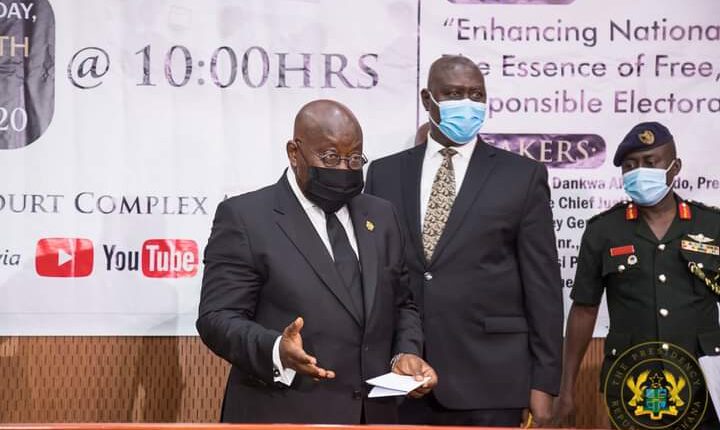 Chief Justice, Anin Yeboah has urged judges to give the necessary attention to all electoral conflicts as the country draws closer to the electioneering period.

According to him, this will be the only way to boost the integrity of the results of the December 7 polls.

“Safeguarding electoral integrity lies in a major resolution of complaints and appeals with minimum delays. There are no doubts that the slow pace of adjudication of electoral disputes is anathema to the 1992 constitution, which mandates the smooth operation of the country’s democratic culture,” he said.

He was speaking at the opening ceremony of the Annual Conference of the Ghana Bar Association (GBA) in Accra.

He is convinced the judiciary has always positioned itself to ensure that the rule of law triumphs.

“The Judicial Service recognises its major contribution of making sure the country is seen globally in the best possible light given the highest regard and application of the law,” he said.

He also disclosed that training on electoral laws has already been carried out for judges and magistrates across the country.

“There is the need to equip and appraise judges, lawyers, political parties and other stakeholders on the substantive laws as well as rules of adjudication of electoral disputes. Training on electoral law has already been conducted for all magistrates, circuit court judges and high court judges,” he added.

When he took his turn, President Nana Akufo-Addo, who was the guest of honour notes the conduct of a free, fair, and transparent elections forms a good basis for strengthening cohesion among Ghanaians and preventing needless dispute.

He stated that the conduct of the country’s elections had evolved significantly since 1992.

“The current multiplicity of media organisations, power of social media, the existence of transparent ballot boxes, decentralised nature of tallying and tabulation, and the mode of voter verification has engendered increasing trust and confidence by the citizenry in the process of electing their leaders.

Together with the compilation of a new voters’ register ahead of the conduct of the December 2020 elections, the President said, “All of these enhanced processes have strengthened the cohesion of the nation.”

According to the President, there have also been those who went as far as stating that democracy was inherently alien to the country’s culture and make-up.

“The continuing success of the Fourth Republic provides the most effective response to this unfortunate viewpoint,” he added.

The President urged the general public to conduct themselves in a manner that kept the unity as one people, irrespective of ethnic, religious, gender or political differences and affiliations.

He reassured members of the Association that his government is making unstinting efforts to ensure the peace and stability of the nation, as Ghana enters the last three months of the electioneering campaign.

“When my time is up, hopefully, after four more years, I want to hand over to my successor and the sovereign people of Ghana, a country that is greater, fairer, stronger, more cohesive, more prosperous and more united than I met it in 2017.
This is the solemn undertaking to which I have committed myself,” the President stressed.