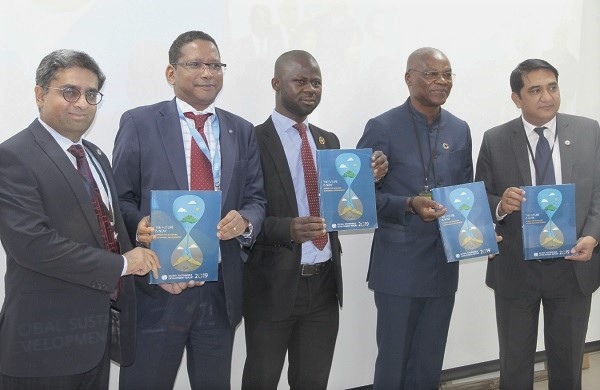 Ghana and other countries have been urged to prioritise investment in scientific research and also adopt relevant innovations the UN Sustainable Development Goals (SDGs) by 2030, a UN global SDG report has recommended.

The ‘Global Sustainable Development Report (GSDR)’ research report, mentioned in particular, low and middle-income countries as those that must harness and boost their scientific capacities through trans-boundary research partnerships to achieve the global development targets.

According to the report, efforts towards achieving the SDGs were slow, meaning, the targets would be evasive if ‘governments fail to take drastic steps to boost the mechanisms for achieving them’.

A Ghanaian scientist, Dr Ernest G. Foli, who was one of the 15 researchers appointed by the UN to conduct the four-year research, presented the findings at the UN office in Accra yesterday.

The launch was on the theme: “The future is now: Science for achieving sustainable development.”

The Forestry Research Institute scientist also said the pathway to achieving most of the SDG targets by 2030 was bleak, “so the key point is that we need to make a lot more progress by leveraging science and technology because we are going too slow and cannot achieve the targets at that pace. We require collective action from citizens and governments to have a chance of achieving the 2030 targets”.

The research further observed that only a handful of the SDG targets were within reach by 2030, while some countries were either going off track or back-tracking in their programmes to meet the targets.

Dr Foli said the targets on school enrolment, child mortality and neo-natal mortality had improved and could be achieved with consistent efforts.

Other targets such as reduction of hunger, poverty, improved maternal health and protection of the environment were however, off track, while some, including carbon dioxide emission, biodiversity conservation and inequality had also back-tracked.

Dr Foli said while leveraging technology, countries also needed to create linkages between the SDG targets and use holistic and context-appropriate approaches to boost their chances of making progress.

“It is key that we do not pursue single SDGs and targets, but apply systems approach and have interactive strategies to achieve the targets,” he added.

A research and policy associate at the SDGs Advisory Unit of the Office of the President, Mr Cletus Alengah, said the report was a wake-up call to the country to get its acts together to achieve the SDGs.

He said the government was committed to partner other stakeholders to boost her chances of achieving the global targets.

The Head of the Ghana Office of the United Nations Education, Scientific and Cultural Organisation (UNESCO), Mr Abdourahamane Diallo, said the UN would continue to support countries in various ways to achieve the development goals.