A private developer in the Ashanti Region has cleared trees planted along the Late Bosomtwe to make way for his mango plantation.

The Manhyia palace, Bosomtwe District assembly, and some NGOs in environment planted hundreds of trees along the Lake to protect it from shrinkage.

The essence of the tree planting was also to provide a green buffer to reduce erosion which runs into the Lake getting it silted.

Despite these attempts to protect Lake Bosomtwe which has been described as the ‘Sea of Ashanti’, a private developer has encroached the buffer of the tourist site wreaking havoc.

He has cleared hundreds of trees, destroying the spawning areas where the fishes lay their eggs.

A non-governmental Organization in environment, A Rocha Ghana which visited the scene expressed grave concern over the development.

Its National Director, Dr. Seth Appiah Kubi said the level of destruction had affected the banks of the Lake where fishes come to lay eggs.

“These tall grasses are the spawning area for the fishes. This is where they come to lay their eggs, and then it hatches, and the fingerlings live there for sometime before they go into the main lake. So, if you are destroying this, you’re impacting negatively on the habitat in the spawning area of the Lake.” 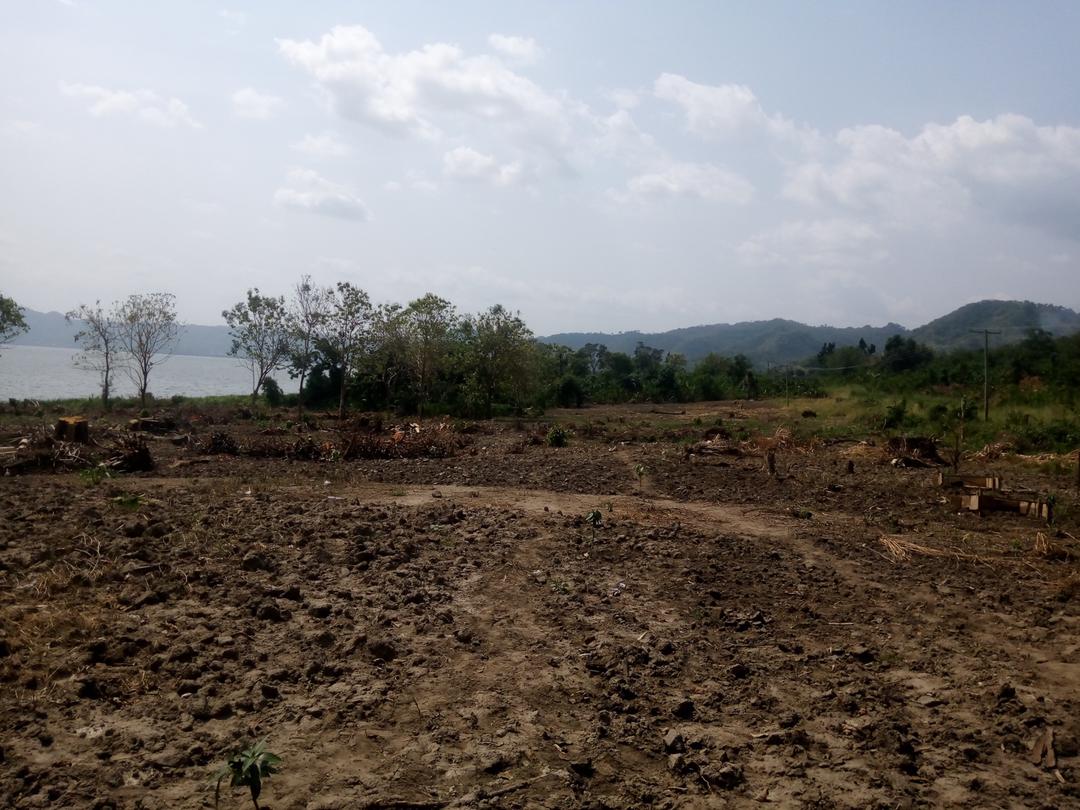 Dr. Appiah Kubi expressed fears that the largest natural lake in West Africa, Lake Bosomtwe, risks shrinkage if nothing is done immediately to reverse the damage caused by the private developer.

“If the peripherals are removed like this, the Lake will shrink. Around the world, we have lakes that are dying,” he lamented.

The development has sparked concerns among residents in the Bosomtwe District who have called on the, Asantehene Otumfuo Osei Tutu II, to intervene.

“Nana, we plead with you to come to our aid and fix this. The trees you gave us to plant have all been cut down in a day by one man. Before God and man, we are hurt because we invested a lot of time to nurture these trees. If nothing is done to stop the private developer from further destroying the trees, we will not involve ourselves in any tree planting exercise again,” Queen mother of Pipie, Nana Akuamoah Boatemaa appealed.

Meanwhile, theghanareport.com understands the private developer, whose identity is not yet known, secured permit from the Bosomtwe District Assembly to embark on his mango plantation journey.

This is despite a by-law which prohibits any such exercise with100 meters of the Lake.

But in defense, the DCE for the area, Joseph Kwesi Assuming, said the permit did not allow the developer to touch any vegetation within the buffer zone. In essence, this happened at their blind side.

“We have made a by-law whereby 100 meters from the Lake is a no go area for anybody. It’s now a buffer zone. It’s a security zone so nobody can do anything in that particular area. But a developer who has been given permit to do farming outside the buffer zone has gone to clear all those areas within the 100 meters zone. So in effect, he has breached the assembly’s by-laws.

He warned sanctions will be handed the private developer and anyone who attempts to flout the assembly’s by-laws.

“We have reported the case to the police and they are now investigating the case. I’m advising developers not to attempt to go into that area. If you go, the laws will deal with you.”

Situated in the Ashanti Region of Ghana, Lake Bosomtwe is one of six meteoritic lakes in the world.

The southernmost section of the site overlaps the northern section of the Bosomtwe Range Forest Reserve creating a combination of forest, wetland and mountain ecosystems.

According to research by the UNESCO, the biosphere reserve sustains 35 tree species, including some used for timber. The site is also home to a great diversity of wildlife and a human population of over 50,000 inhabitants whose main economic activities are farming, fishing and tourism, as the lake is a major national tourist destination.

The area is widely used for research, especially on climate change, as well as environmental education for schools and universities.