NDC Vice-Presidential candidate, Prof. Naana Opoku-Agyemang, has challenged the governing NPP to prove that the previous NDC administration did not have the interest of teachers at heart.

She claimed that NPP’s constant reference to the cancellation of the teacher training allowance and the book and research stipends were false.

Speaking on GHOne TV, monitored by theghanareport.com, the former education minister said  these accusations have been repeated for propaganda purposed.

Listen to the interview below from the 25 min mark

The Professor, who is partnering former President John Dramani Mahama for the December 2020 polls said another falsehood used against her was that she cancelled the book and research allowance meant for lecturers in tertiary institutions.

The educationist maintains that teachers were never marginalised under her watch and such claims are only “propaganda” aimed at tarnishing her reputation.

“How did I do that?” She questioned in an interview on GhOne.

She says she has been asking teacher unions and other critics to identify the actions they believe she undertook perceived to have put teachers at a disadvantage.

“Did I reduce your salaries? Did I prevent you from moving up? No! They don’t know what was it and I think it is part of the propaganda,” she insisted.

The government at the time had wanted to replace the book and research allowance with a national research fund.

“In order to encourage more research work in tertiary institutions and to realize its full benefits, Government has decided to review the existing system of payment of the book and research allowance and replace it with a Research Facility.”

“Mr Speaker, the Ministry of Education through the National Council for Tertiary Education has set aside GH₵15 million towards the establishment of a Research and Innovation Facility,” portions of the 2014 budget presented by Finance Minister at the time, Seth Terkper stated.

But lecturers opposed the idea and asked for both the book and research allowance and a national research fund.

However, it turned out that the NDC government made arrangements for the payment of the book and research allowance for the 2015/2016 academic year just before they exited office. 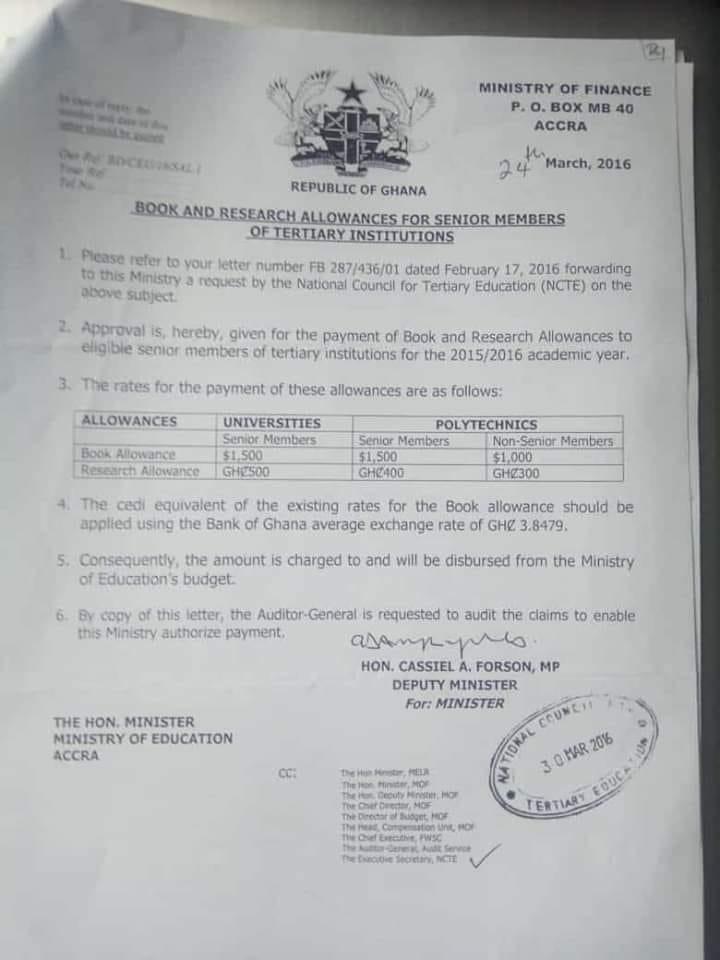 In June 2019, Vice President Dr. Mahamudu Bawumia said, at president Nana Akufo-Addo’s acclamation that it was the NPP government that restored the book and research allowance.

In a statement to Parliament on August 11, 2020, Minister of Education, Dr Mathew Opoku Prempeh (Napo), said that Mahama government cancelled the book and research allowance which the Akufo-Addo government has restored.

“Mr. Speaker, the Book & Research Allowance which was abolished by the NDC government, has been restored by this government,” Dr. Prempeh said.

But reacting during the interview, Prof Opoku-Agyemang asked the government for proof of the cancellation.

She continued: “I have left the ministry but all the documentation should be there. I have been waiting for fours years for somebody to bring me the letter that said I had cancelled the book and research allowance”.

She suggested that the NPP cannot restore what has not been cancelled and expressed surprised that the NPP went ahead to include the ‘restoration of the book and research allowance as part of its achievements.

She further challenged the public to verify from the tertiary institutions if the allowances were indeed cancelled by the NDC as being claimed.

“Every interview I have been asked the same question. Again, about the teacher allowance. And I say, ‘who cancelled it?’

She explained, “When I go on radio, I say students qualify but you have to pay your admission fee, be registered, before you can get the loan.”

Her reference to the allowance as a loan to be paid back affirms that the NDC government had indeed replaced the allowance policy with a loan policy.

But she has insisted, “there was no cancellation.”

The position of Professor Opoku Agyemang is in variance with another party official of the NDC.

The National Youth Organiser for the NDC, George Opare Addo, admitted that indeed former President John Mahama actually cancelled the teacher trainee allowance and apologised with a promise of restoration if the NDC returns to power.

“Everybody has the right to change his mind, so there’s nothing wrong if former President Mahama believes the decision was unpopular.

“If he comes, he will restore it because it was an unpopular decision and we apologise.”

George Opare Addo who was speaking during a ‘Youth Debate’ on Asempa FM’s Ekosiisen programme on Monday 17, August 2020.

Listen to Mr Opare Addo below: