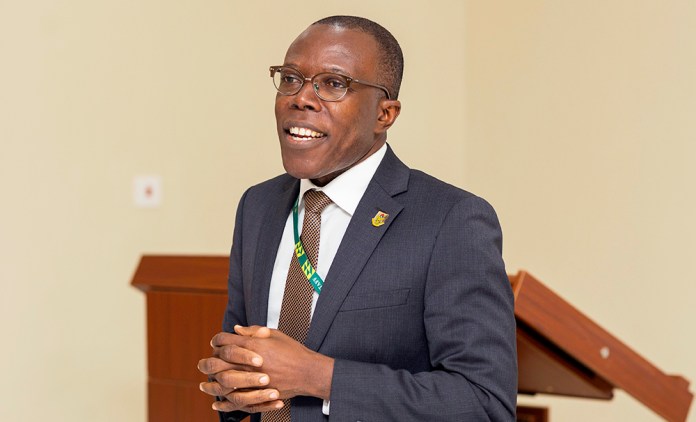 Professor Ellis Owusu-Dabo has been re-elected by convocation as the Pro Vice-Chancellor of the Kwame Nkrumah University of Science and Technology (KNUST) in Kumasi in the Ashanti Region.

The Vice-Chancellor of the University, Professor Rita Akosua Dickson had nominated three Professors for one to be elected for the position.

This had became necessary as the position shall become vacant on October 1, 2022 and it is in accordance with Statute 13(b) of the University.

After the election held on Tuesday September 20, 2022, Prof. Ellis Owusu-Dabo, Professor of Epidemiology and Global Health and an alumnus of KNUST was declared winner.

He was followed by the only female among them, Professor (Mrs.) Atinuke Olusola Adebanji of the Department of Statistics and Actuarial Science of the University who obtained 84 votes.

Prof. Emmanuel Danquah took the last position with only 47 votes.

Accordingly, the names of the two persons with the highest number of votes shall be submitted to the University Council, and the Council shall appoint one as the Pro Vice-Chancellor.

The voting took place at the Great Hall and Clinical Students’ Hostel at the Komfo Anokye Teaching Hospital (KATH).

The Pro Vice Chancellor-elect, Prof. Owusu-Dabo graduated with a Bachelor of Science in Human Biology in 1992, MB ChB (Medicine and Surgery) in 1995, and Master of Science in Health Services Planning and Management in 2001.

Also, he is a Fellow of the West Africa College of Physicians and a Fellow of the Ghana College of Physicians. He obtained Ph.D. in Epidemiology and Public Health from the University of Nottingham, in the UK in 2010. Professor Owusu-Dabo holds additional Certificates in Clinical Drug Research and Health Policy and Reproductive Health from the Vienna School of Clinical Drug Research and the University of Hawaii, East-West Centre, USA respectively.

As the current Pro Vice-Chancellor, Prof. Owusu-Dabo is also a research management Consultant and has consequently secured and managed multimillion-dollar grants from principal granting institutions such as the European Union, National Institutes of Health (NIH), The World Bank, and the Mastercard Foundation. He has travelled extensively and served on several boards at both local and international levels.

He is a Perelman International Scholar of the University of Pennsylvania School of Medicine. As a university teacher, he has trained undergraduate and postgraduate students, as well as mentored young faculty at both local and international levels.

He has published over 230 research articles in peer-reviewed journals. His passion is building the capacities of next-generation scientists and health systems to help solve Africa’s health problems through scientific research collaborations.

Galamsey Fight: Wontumi, Charles Bissue and Others Must Prepare For Jail– Sammy…