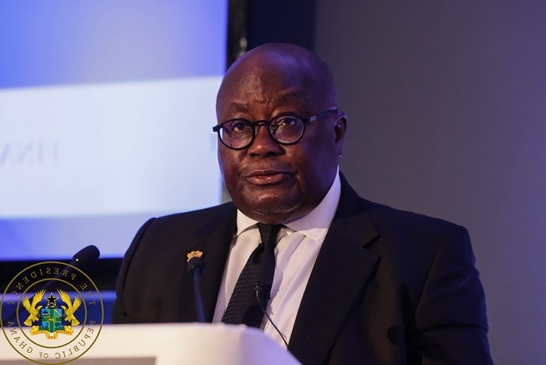 President Nana Addo Dankwa Akufo-Addo says the programme of economic recovery that his Government put in place, some three years ago, upon his assumption of office, has been significantly successful.

According to President Akufo-Addo, the Programme has “addressed the key phenomena that needed to be addressed, like the rate of growth of the economy, the expansion of employment, much, much stronger economic activity, and also enabled us to pay for one of the most important social innovative initiatives that in the government in Ghana has undertaken – the Free Senior High School policy.”

Addressing a press conference at the ongoing World Economic Forum, in Davos, Switzerland, on Thursday, the President told the media that he came into office at a time when the Ghanaian economy was in considerable disarray.

“Even though we were under an IMF programme, many of the indices of economic well-being were not present. High rates of inflation, high indebtedness, very sluggish growth, negative growth in agriculture, bare growth in the industry – in fact, those are the circumstances that brought me into office as President of Ghana,” he said.

President Akufo-Addo noted that the first three years of his mandate has been spent, first of all, in trying to restore stability to the management of Ghana’s economy, cutting down on the deficit, and bringing down inflation.

The President continued, “Generally, the growth, of course, has grown from an average of 3.6% to an average of 7% in the last 3 years. You see an economy that has somehow reversed the decline and is moving on an upward trajectory. It has also meant that these improving economic indices have us touted as the country that receives the largest investment in the ECOWAS/ West African Region”.

In all of this, President Akufo-Addo stated that the most important aspect of it has been the discipline that has been restored to the management of Ghana’s public finances.

“I think that if we are able to maintain the discipline that is required of us, then we would have no need and we can proceed to design our own path for economic growth and development. We have gone so far as to pass a Fiscal responsibility law which has pegged the acceptable fiscal deficit at 5% annually with penalties that are imposed against the government if we go past the 5% limit. We are determined to make the law work,” he added.

With this year being an election year, the President assured that Government is not going to loosen the purse strings, because “we take the view that, assuming we were to win and the economy is in disarray, that means that all the work that we did would have to be re-done, and that is better to maintain the discipline and accept that the Ghanaian people have a very clear understanding of what is required to be done so that we can have that progress that we need to make.”

The impact of the programme of economic recovery, President Akufo-Addo stressed that “the Ghana living standards survey tells us that unemployment in Ghana, which stood at 11.5% in 2015, is now at 7.5% in 2019. These economic data are not just data in themselves but they have an actual impact in the lives of people.”

Describing the revival of Ghanaian agriculture as one of the outstanding developments that have taken place over the last three years, the President explained that, at the time of taking office, the country was importing basic foodstuffs from Ghana’s neighbours.

However, as a result of the implementation of the programme for Planting for Food and Jobs, he stated that “we have reversed this situation. We are now net exporters of foodstuffs again. We have had two bumper harvests in Ghana and in the last two years, we have stopped importing maize, we have cut down on our import of rice.”

Additionally, he stated that “the prices of foodstuffs in Ghana are the lowest that we have had in two decades, and all of this is because of the programme for planting for food and jobs which is essentially a program for Government support for Ghanaian agriculture, especially smallholder agriculture.”

Touching on the 1-District-1-Factory initiative, the President stated that the purpose of the policy is to create employment in the rural communities, tackle the phenomenon of rural-urban migration by ensuring that there are worthwhile jobs for young people within their rural settings, and, of course, help in the transformation of the Ghanaian economy.

With Ghana’s economy, like many other economies on the continent, being dependent on the production and export of raw materials, he stated that this has been the reason why growth in Africa has been sluggish and has led to the spillover of lots of Africa’s young people fleeing the continent.

“The solution required the industrialization of our continent and our own country and taking the steps that will lead to structural transformation. The measures that we have put in place for rural industrialization are also part of those measures of recovery,” President Akufo-Addo said.

On education, the President noted that the prudent management of the Ghanaian economy has led to the implementation of the Free Senior High School policy, which is guaranteeing a minimum of senior high school education for all of Ghana’s youth.

“We have seen some dramatic figures in the educational system of the country. Roughly there were about 800,000 people within the secondary educational system when I took office. In the three years since the application of the free senior high school educational policy, we now have 1.2 million young Ghanaians within the secondary school system, which means that the 100,000 yearly dropout rate has now been addressed and they are finding their place in school,” he added.