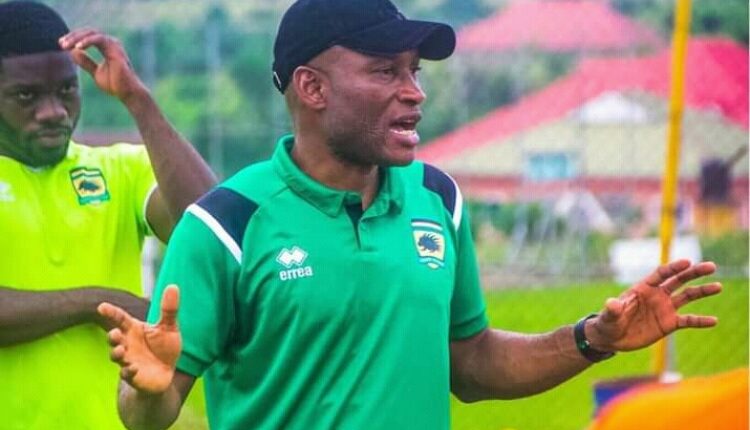 Asante Kotoko Communications Director, David Obeng Nyarko has disclosed their head coach Prosper Narteh Ogum cannot leave them at this moment for any job, not even the Black Stars coaching role.

The enterprising lecturer joined the Porcupine Warriors prior to the commencement of the season from WAFA on a three-year deal and is currently doing so well with the club.

Despite him being yet to honour a year in his contract, he has strongly been linked to the Black Stars vacant coaching job after the technical team got dissolved a few days ago following the team’s shambolic performance in the ongoing AFCON.

Speaking to Akoma FM in Kumasi, the club’s spokesperson has ruled out any chances of linking coach Prosper Narteh Ogum to any club, not even the senior national team. He said;

“Prosper Ogum has a running contract with Asante Kotoko. There’s a project ongoing at Asante Kotoko and the coach fully shares in the vision of the project.”

“At the moment he can’t leave the project for another work that’s the job of the Black stars. He has achieved a lot & he’s doing well at Asante Kotoko. Prosper Nartey Ogum is under contract at Asante Kotoko & he’s still the head of the technical team of Asante Kotoko.”

Asante Kotoko at the moment sits at the summit of the Ghana Premier League table with 30 points after 14 matches.

They will look to maintain their eight game unbeaten run when they face Great Olympics this Friday at the Baba Yara Stadium in an epic week 15 tie.