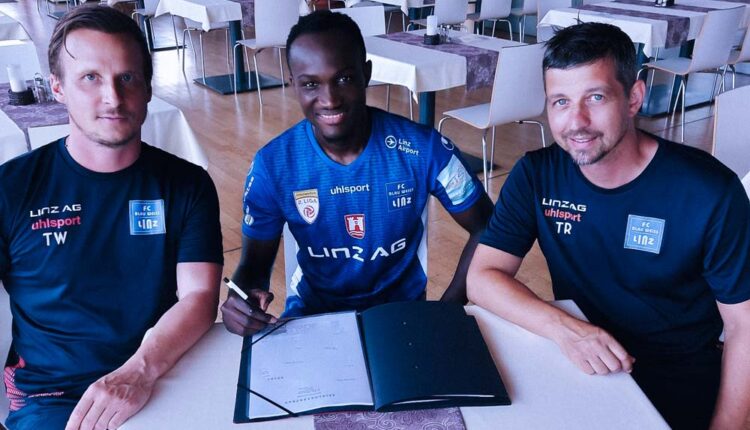 Raphael Dwamena: This is why BW Linz are banking their hopes on the Ghana striker despite medical history

Austrian Bundesliga 2 side Blau-Weib Linz defied all odds to acquire the services of Ghana international Raphael Dwamena despite his past medical record.

Dwamena had been on trial at the club for the past months in a bid to bounce back from his two-year heart troubles.

The 25-year-old signed a contract until 2023 after impressing on the trial.

Medical experts conducted a thorough medical examination on the striker before finalizing the deal.

Sporting director at the club, Tino Wawra detailed why they secured the services of the player despite his medical history.

“I have a good connection to his advisor, to ex-Dortmund professional and Swiss team player Philipp Degen. That is why this commitment was possible. Here Raphael also saw that something is developing, and he now wants to follow this path with us in the long term. I am very proud that we were able to convince such a top striker to come to Linz.”

In the summer of 2018, he transferred to Spain to join Levante.

He left the Frogs to join Real Zaragoza on loan the following season but his deal with the club was truncated after suffering a heart scare.

Dwamena returned to the field by singing for Danish second-tier side Velje BK after undergoing several medical tests in Barcelona.

Vejle BK withdrew the Ghana striker Raphael Dwamena from team engagements due to a relapse in his heart condition.

He left the club with two goals in five appearances to his credit.

It’s the third time Dwamena’s career is having to take a hit by his heart condition.

In 2017, the Ghana international saw a move to Premier League side Brighton and Hove Albion cancelled for reportedly failing a medical in relation to his heart condition.

Dwamena is a full Ghana international, scoring twice on his debut in an Africa Cup of Nations (Afcon) qualifier against Ethiopia in 2017.