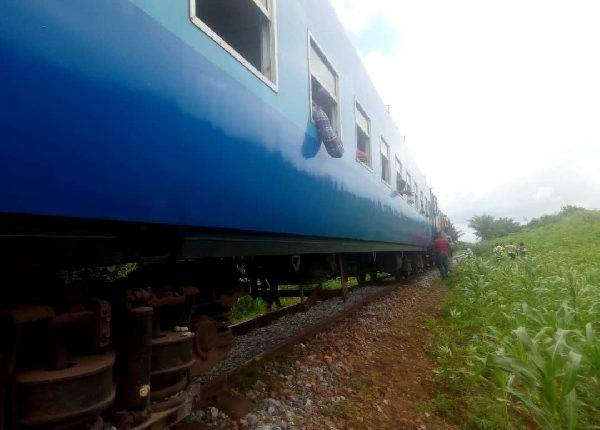 A plan to relaunch the Accra-Nsawam train service on Thursday morning suffered a minor a set-back following the derailment of one of the coaches.

Graphic Online’s reporter, Nana Konadu Agyeman who was part of the media team on board the train and were covering the beginning of the service reported that the coach derailed at Chinto near Papase at about 12.21 pm.

None of the passengers, media personnel and staff of the Ghana Railway Company (GRC) sustained any injury.

The relaunch of the service followed the successful test run of the train on the rehabilitated Accra-Nsawam line.

Briefing the press on the incident,  the Traffic Manager of the GRC, Ms Comfort Awinya, described the incident as a “minor derailment”

“What just happened is a minor derailment and this is a test run to identify problems like this. This test is to allow us see if the lines are good for us to go and also to send message to our customers to know that we are on the way coming,” she stated.

She assured that the derailment was “nothing serious and we have abled men on board to rectify the problem,” she added

She pointed out that if the derailment had been serious, it would have been catastrophic, saying that, “when train derails it does not stand on the line.”

Workers of the railway company were able to put the derailed coach back on its track by 1.33p.m and  the train resumed its journey to Nsawam.